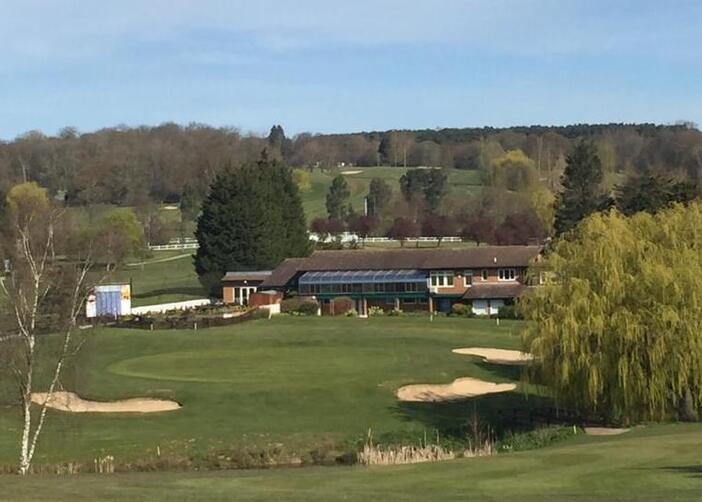 Ladies and Seniors Virtual Fantasy Cup :
​Be there for the off at Warley Park
Wednesday 8th April 2020, at 9am.

Competitors and other Disinterested Observers

Just wanted to update you all before the big day tomorrow with the latest information.

Firstly, we will, at times, refer to the cup simply as the Virtual Cup as we have had reports that some people’s computers block mail with the word ‘Fantasy’ in them, although I must admit mine doesn’t and neither does that of Peter Wines, who you may know won the Seniors' Gigolo of the year award last Christmas.

You may also know that the Open Golf Tournament for 2020 has just been cancelled, which is a great pity, but every cloud has a silver lining and I have been contacted and agreed that highlights of our competition will be broadcast instead. Please be on your best behaviour and don’t use any bad language. I have sourced masks for those most at risk. They will be bringing the Skycart and, under the commercial agreement I have signed, you may be called for interview. If you are unavailable don’t worry as I will be only too pleased to do the interview for you.

Additionally, although the course looks magnificent, we still have the cups in the holes upside down due to safety conditions being applied. This has caused disputes in the past as the rule is the putt counts as in, if it hits the flag, doesn’t drop, but does stop within 12 inches. To overcome any disagreements, I have sourced the premier league VAR system which Jeanie will operate from a secure room upstairs. I am working on the basis that players will do what Jeanie says  (I do). However it does mean that every action will be monitored, but helpfully I will be able to report on any match I wish to during the course of the competition.

I am really pleased that Isobel Brett is able to join us in tomorrows competition in the midst of her time consuming negotiations. Isobel has known the course for longer than all of us and believes she knows every inch of Warley Park. However, by a quirk of fate she is drawn to partner Ash Patel so, given it is a Greensome, is likely to be playing shots in places she has never seen before, or even knew existed.

Lastly please be sure to sign in on the day. You are not allowed to touch the machine (more health restrictions), so please report to the Virtual Inspector Regan standing at two metres distance, saying your name, and, if applicable, lower your mask so he can see your face. We do not want anybody impersonating a Warley member.

Stay well and see you tomorrow at 9am sharp.

Simon, Jeanie, Gordon, Sue, and Sarah
Insiders Preview : The LSVFC Team get Psyched Up for the Big Day
Others in Upminster (highly upmarket and competitive area I'm told!) have gotten very excited and sent in early photos of their preparations
The Tallenires (Jan and (Roger) celebrating their safe arrival home from South American exploits - unfortunately the British Empire is all over and so they had to bring their flags home and plant them in their garden! NB There is an alternative Tallentire picture, but the Ed is saving that for later issue with a clear health warning! 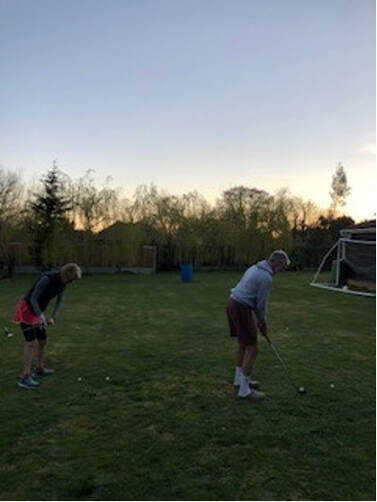 Meanwhile the Brown's (Liz and Geoff) are getting their practice in late into the evening! 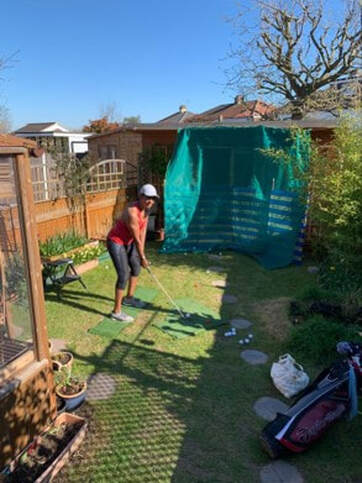 Delray apparently borrowed her husband's cricket net for this practice - knowing how far she hits the ball I hope she is on good terms with those neighbours at the rear!
The Wilkins (Chris and Brian) or Mrs Elegance and Mr...... oye..... that's Chris's tee shirt.....are ready and raring to go (well as long as its after 10.30am says Brian).
Meanwhile Sir Simon's Shenfield Echo is obviously getting a reaction as there is another early entrant 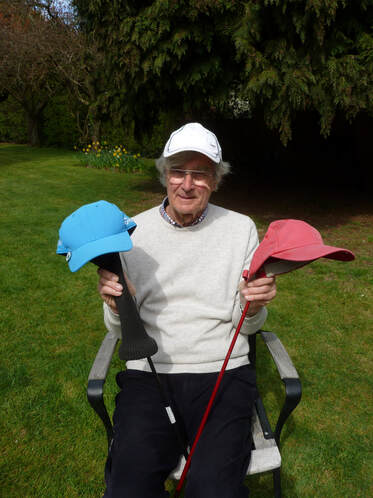 Brian (Wright) was getting ready for practice but then came a decision to be made - Time to Think Smartly he says, Three Heads are Better than One!