The annual Christmas lunch was again very well attended this year to mark the last major event for outgoing Captain Kim; who is must be said has had a very successful year (well apart from one aspect!).

Most Seniors got the message and sported their Xmas jumpers. One or two took the opportunity to dress extra appropriately. To name a few, naughty Bill in his Elf kit was clearly playing 2nd fiddle to Chief Elf Keith (who was given a very warm welcome at his first visit), and King Colin, who ignored his past treasurers role of delivering austerity by donning a ridiculously extravagant headdress. Spiggy of course made clear his view on the newly agreed policy of smart casual for matches by modelling his jacket and tie.

An excellent lunch prepared by and served up by our highly thought of chef(s) and front of house was followed by :

Competition Secretary Mike and Captain Kim presented all the Trophies and Prizes for Golfer of the Year and other Senior Competitions. Those lucky enough to be involved and present are listed with their photos below. (photos by courtesy of T-Rex productions). 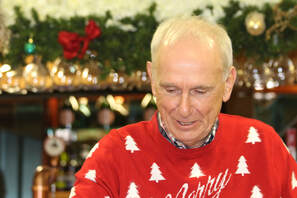 "Captain Greengrass" as he must now be known, aka Sir Simon,  delivering his traditional and excellently amusing Fantasy News End of Year round up, in which a variety of awards were given out, some real! (See the Final Fantasy League Report on its separate page for full details, incl photos). Our thanks to Simon for providing us with some light hearted insights during the year (even if the web editor was a rather large target).
​
Our Wilkins Tours Agent Brian presented the end of year prize for the overall winner for the 4 away day trips (also shown below).
Captain Kim gave a special award to Richard Stephenson, our outgoing Secretary of some years, with a lots of thanks all round for all the magnificent work he has undertaken in the past, particularly to ensure our diary/fixtures worked and even more importantly that our food was of the highest standard! A Seniors thank you to Richard.
​ 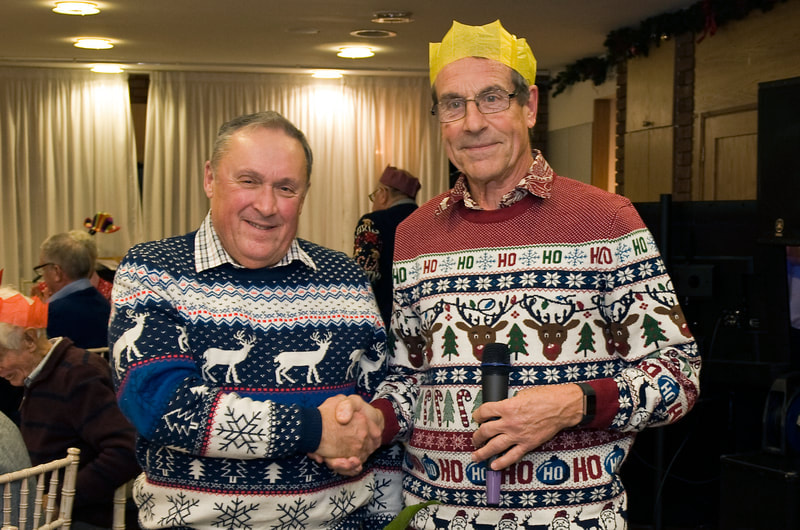 Outgoing Secretary Richard with his special award
The much coveted "Clubman of the Year' award was given by Captain Kim on behalf of the Seniors to the original founder of "The Voice' franchise Mike Trett. Well done Mike, well deserved we all say. ​ 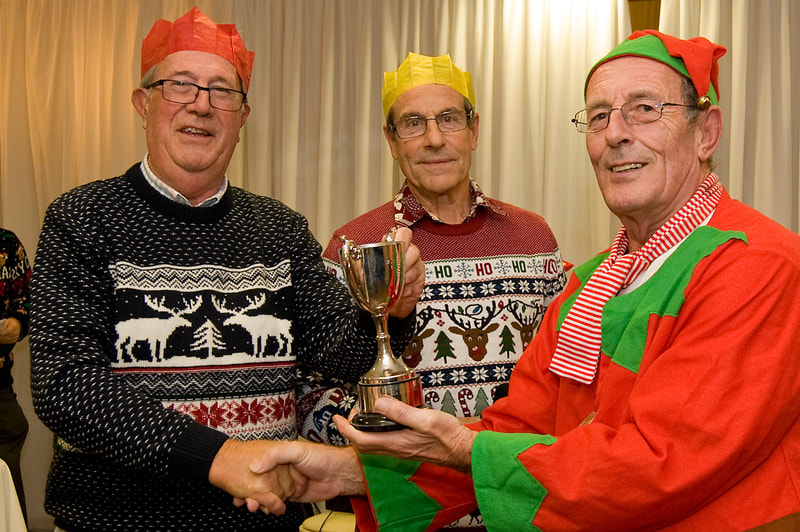 Our special Clubman of the Year, Mike Trett. - Presented by Captain Kim and Chief Elf Keith Regan (whose help to the seniors on the new booking system was outstanding).
Captain Kim particularly asked that those involved in the day be given special thanks:

Martin for the work on the awards (he has his own Awards Table photo below);
Simon for the TV event of the year;
​Martin (again) and Allan for their musical happening (see photos);
Winsey, Doug and Bobby (Doe!) for their whistle stop tour 'Mayhem and Money' (also a photo):
​The Anonymous Benefactor for the auctioned off Secret Santa prize (Won by Martin - 3rd mention) and the generous £5 donations from the seniors.
And with a special mention to Richard and Mike Trett for their special awards and help given to him personally. ​
A good Christmas lunch, a few (only a few) drinks and some lighthearted amusement, marked a fitting end to another good year.  Our collective thanks to Captain Kim and all the hard working Seniors' Committee Officers for our ongoing success in 2019. ​

We look forward to 2020 which holds some interesting challenges. Watch out for these guys as the faces of next year!