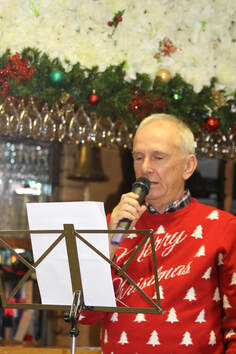 Today I will announce the much sort after Fantasy Awards for year and the final league table positions. For those of you attending your first awards ceremony please be aware that because the awards have such high value personal publicity value you don’t actually get anything so don’t bother coming up. However I am aware some of you like personal acclaim so if you wish to stand and acknowledge the crowd you may do so but please limit this to 5 seconds as we do not want to fall behind schedule.

The Fantasy League this year had a record 114 teams and a further 11 donations or put more accurately entries from seniors who forgot to submit teams before the deadline
Overall 61 seniors scored Fantasy points (last year it was 62 so we are consistent) with 7 players scoring 50 points or more for their managers. They were Imelda Burgess who got 46 of his 50 points in GOY competitions – that’s focus – Orson Wells, Pedro Smyth II, Jimmy Handley, and Wellard Price. In second place was Dave the Skeleton and again our winner was the Robot called Robson. I have bottles for the top two. 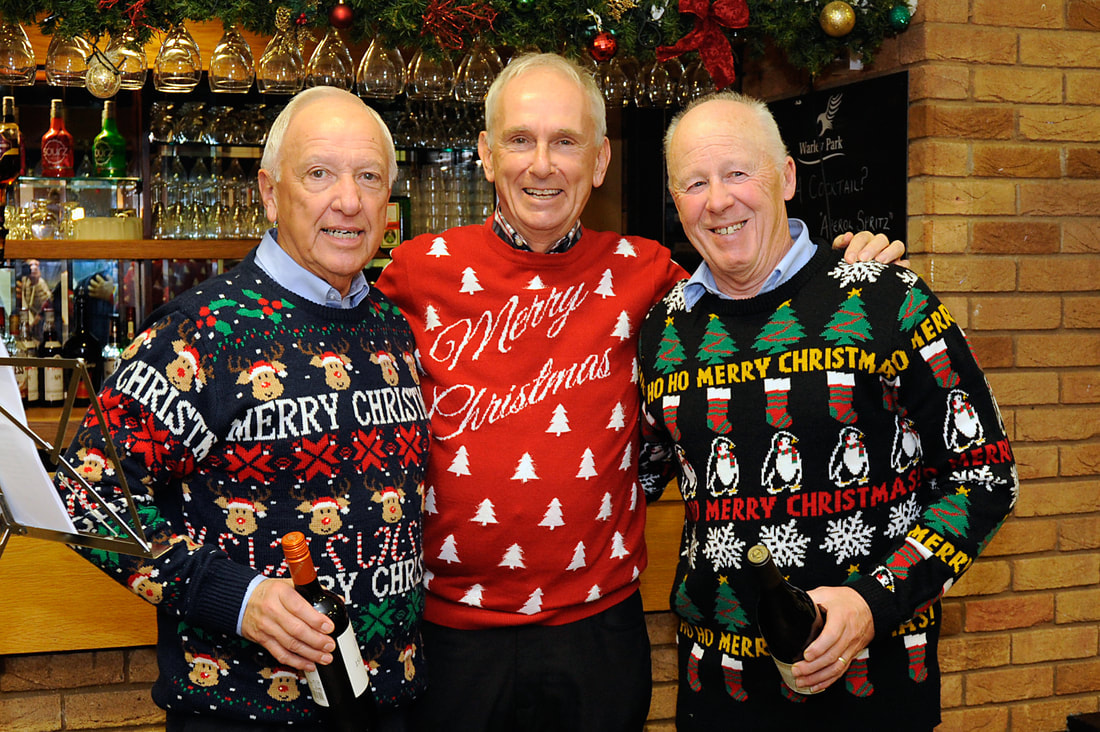 Robbo and Dave 1st and 2nd highest scoring players in FL over the year
In next year’s Fantasy League Messrs Robson, Skeels, Price, and Handley will be on the restricted list so you will only be able to have one of them in your team

In 3rd place in the annual prizes was ‘welcome back’   Skinner Latte who we have not seen for a year but scoops £25. In 2nd place and ‘welcome back’ from your latest cruise Lord Benton who gets £50. And our winner of both the last interim prize and the overall pot is our very own Mr Golf - B Wright. He may be a quiet man but he studied the form and last February picked Robson, Skeels, and Price who were our top 3 scorers and then didn’t need any transfers. His total pot is £90. He is now short listed for the Arsenal job and is available for managerial consultations for the rest of us also rans having won by 78 points. 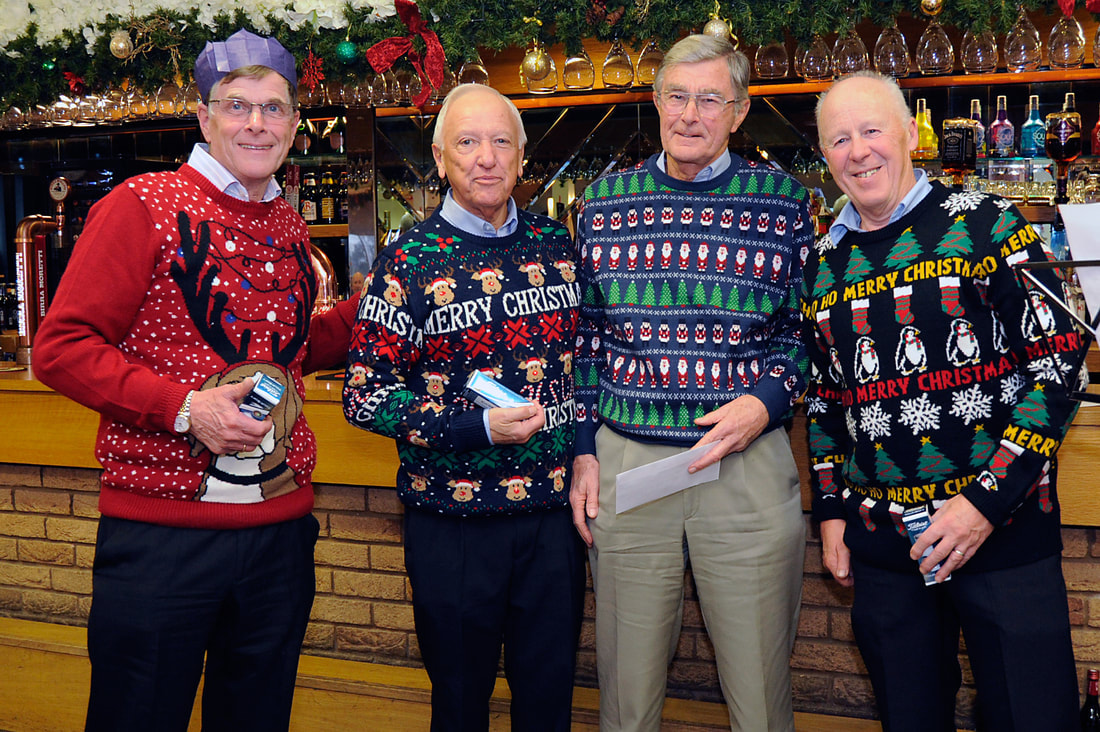 Fantasy League Manager Winner Brian with his high scoring players
I can now also report the manager finishing in last place with his team of Graham Killington, Greg Burnham, and Bob Doe and that is the self named Brown Squirrel Allan Brown. I like to give a prize for last place but I am hesitant as it is money for charity. I therefore asked Austerity Ash for a donation and he kindly gave me a box of biscuits paid for out of funds. It transpires though that we buy biscuits for opposition teams in the matches and when the season ended we had half a box left - this is it. Well done Allan 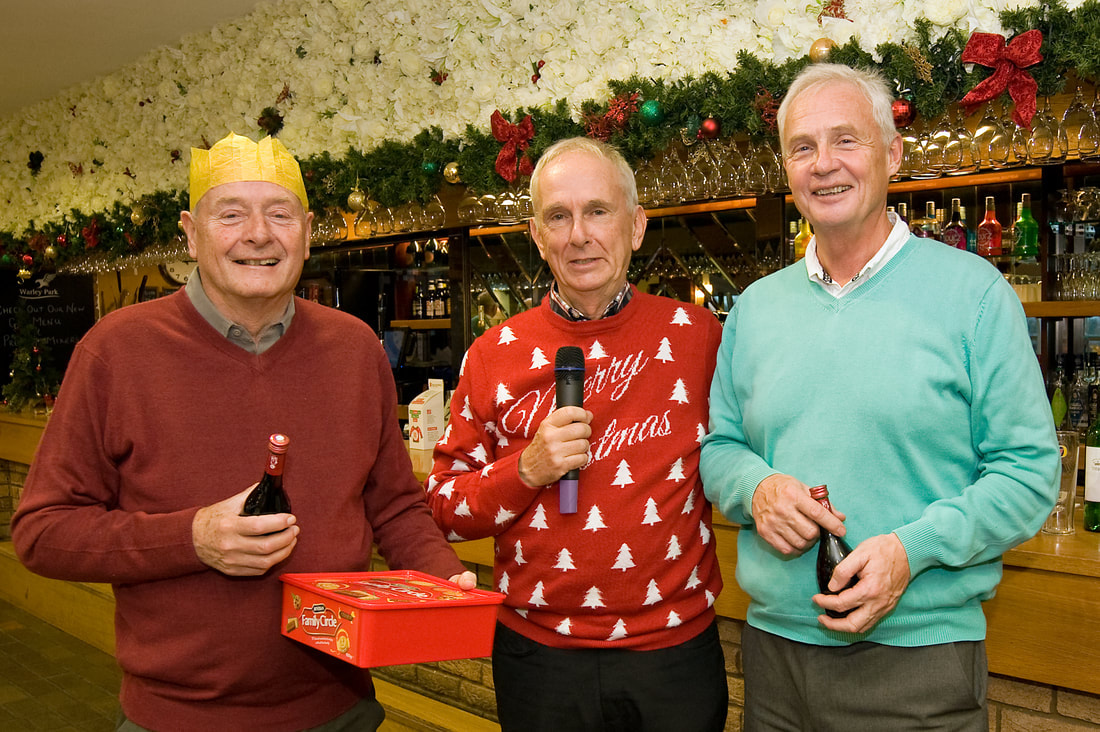 ​Now to the main part of the show and let me remind there is no point coming up to get a prize as you will only make a fool of yourself and you have already done that to get a the nomination.

Before I start though a special mention of Gunga. It has been a good year Martin as you haven’t won anything.

First though I remember Harry Geering Gear and Farquhar Mackay who both gave us some humorous stories and of course Peter Musgrove who once played 3 clubs and a putter with 9 clubs in his bag. Nobody said anything at the time as he was in charge of cards that day. We also hope to welcome back Pete Burgess soon who has been away ill. We need him as nobody else can fill his shoes (or would want to).

I now start with Captains Creep of the Year that goes to Doug Garvey. Fantasy News uncovered the story that Captain to be Steve had been the Gracelands and the theme for Senior Captains day next year will be Elvis and within 4 days Doug arrived in blue suede shoes – have you got them on today Doug.

Kindness to the workers award goes to Roger Tallentire who had an email from his plumber thanking him for the £12 he sent him by bank transfer marked For Christmas Lunch. He later realised Plumber and Patel both start with P.

I don’t know if you know but Roger is the club Welfare Officer as well as being a leading Quiz master. At the recent quiz to raise funds for the colts he noticed the table with 5 colts some of whom were only 4 feet high was last by some way so adopting his welfare hat he wandered over as told them not to worry, it was great that they had come to support the quiz, and obviously the questions were more for adults. Do you like the club he asked – Yes in high voice – and do you like golf he asked – Yes in high voice – and what’s your handicap – 5 in high voice – Oh and your friend – 6 in high voice – sod that you can’t be good at everything. Next question!

Authority Circumnavigator goes to Agent Tillett. My wife had organised the ladies quiz and negotiated a single choice menu of curry and rice at a price even the ladies thought was low. Then she found out Stanley unbeknown to her had gone into the office and changed his order to an omelette. I got the complaint and had to point Stan out to Jeanie. It transpired it wasn’t the omelette that caused the problem but the fact he wanted it filled with mars bars.

This year Gigolo of the year has been a problem as I got a bit fed up giving it to Peter Wines. I decided to take a vote amongst the girls asking them to nominate the lead Gigolo and say why. When I got it back they had all voted for Peter and given their reason as: ‘He’s Harmless’. Times have changed I thought as he didn’t used to be.

Poet of the year goes to Kevin Price after he wrote about me on my 70th birthday and he shares the How to Treat Your Wife Award with Pedro Smyth. Kevin asked for an early tee time so he could help his wife pack her case to go on holiday and Pedro asked his wife to take the 36 pieces of a £20 note chewed up by his dog (also Pedro) in to the bank manager for a refund whilst he played golf.

Look-a-like of the Year is shared by Bill French who the girls are convinced is George Michel reborn and Paul Shooter not because he looks like Andrew Ridgely but because he found a picture just like him painted on a wall in Laon when we were on the french trip. It was a Ram and Paul loved it.

Innovator of the year goes to Yo Yo O’Neill who sprays deodorant on his club handles to tighten his grip. He has bought 12 cans for the new captain to try.

The Ask Something Stupid award goes to Brain Wilkins who rang Stan’s wife to ask her to unravel an old jumper he loved and knit him a new one with the wool. Mrs Tillett obviously wins our knit of the year award but has to share it with Brian.

At this point I would like to thank Richard for all the work he did to add new fixtures to our list. He is standing down but as fate would have it Colin Brown is now Vice captain so I expect us to play Fynn Valley and various other clubs we have never heard of unless he buys a new satnav.

And then there is Gordon. Huge commissions on Epic Flashes make him businessman of the year. He is now has a contract with Kevin for Flash sales, Sky news for News Flashes, and four sanitary ware companies for use of the phrase Flash in the Pan. A further house extension is planned for next year.
​
And finally the Fantasy Award for the most mentioned senior in Fantasy Awards goes to Roger Tallentire coupled with Crabber of the year after he went head long in the Solent and opportune Taxi grabber of the year who took the Shooters cab after the Captains Dinner dance and only realised it wasn’t theirs when they arrived in Shenfield and not Upminster. He could have won Gigolo of the year for lack of attention in the back seat but didn’t because it was his wife. Please come and get your prize Roger. 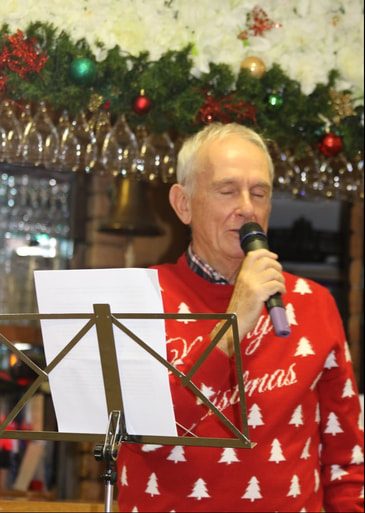 Don't you just love it when the Karaoke star gets to the real feeling part of the message and the eyes close.