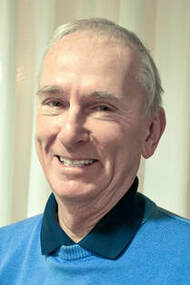 Before I report any news I want to thank all of you who came to my Fantasy Birthday Swindle Special on May 3rd and thank you for the good wishes and cards; 32 was a brilliant turn out and that didn’t include the cake crashers who sidled in thinking I hadn’t noticed them. Thank you too (I think) to Gordon for the special newsletter and Kevin who clearly has at least one talent although he hasn’t told me how long it took to write his missive. I loved it all as there is no such thing as bad publicity!

​Fantasy Simon St Hugues
On official business the latest Fantasy League results show Bob Bird flying in to land the Spring leg of the Four Seasons cup, outlasting Jiminy Handley who was second. Meanwhile PB had a PB as Pete Burgess landed the first leg of the Golfer of the Year – the Spring Bonus Cup – with French and Saunders second. Later, Dolly Appleby landed the next GOY competition as he recorded a stunning net 63 in the Old Codgers Medal, beating Colin Brown, who may actually be Saunders. Well done to these winners.

Footnote: Fantasy League has identified a senior who went on holiday and played golf bragging he had a 6 handicap. It later turned out that their new found friends and golfers have a house in Burstead and may join Warley Park – the truth will out, but who is it?