The Lady and Senior Captains - Our Hosts for the Day 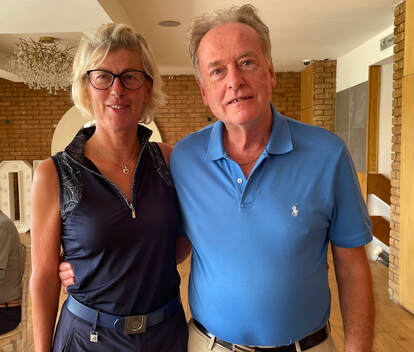 A few issues had to be resolved before the day arrived. Not quite enough men were brave.
enough to place themselves with ladies, so some degree of direct recruitment (pre-woke known
as ‘press ganging’) was required, and the issue of dress was hotly contested - it was decided to
let the ladies wear those, but that we would all have the option of staying in golf gear for lunch-
​         at that point of course no-one had seen Chris Vander’s shirt - but never mind. 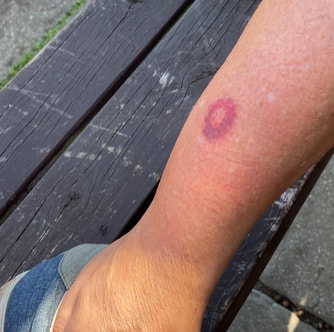 But all got resolved and 44 men and ladies arrived to share an enjoyable game under Chapman rules.  Another slight hitch as quite a few people had no idea what the Chapman rules were - although they thought is probably wasn’t much to do with Monty Python. Whether everyone actually played the same game is therefore an unanswered question!

The ladies wanted to stay ‘hip’ and follow the lead of the new ‘Strictly’ by fielding the first ever same sex couple and Mike Tringham was the lucky man to to have 3 lovely ladies to play with.  Leaving their first nine, he was reported to have told the ‘man painting the fence’ that there had been no discussion about football ….but that he was of course enjoying the chat about grandchildren.

The weather for the day was fabulous and the course was in excellent condition.   There was lots of pre-game chat about the pairings and a number of people thought that the Delray Bussey (fast improved and recent winner of many ladies comps ) and recently identified new Seniors bandit, Mark Woodcock, looked very strong on paper.

Out on the course there was apparently a battle going on between Wilco and Robbo for nearest the pin honours - but more of that later.

It was noticed that quite a few of the ladies had taken compasses out with them and were putting them to good use for the 2nd shots - many having to go to places on the course they have never been before to play the men’s (mostly) longer, but often rather more wayward shots.

The other great challenge on on Ladies and Seniors day is of course the ‘test of the bladder’.  Strangely, given all the stories that you ‘hear’ about ladies always having to use a loo wherever they are, ‘just in case,’ the men usually fail on this one much more frequently!  But of course nature has been kinder to men!
But the story of the day has to be the ‘civil court action’ that may embrace our new Seniors Secretary shortly. Will this be a (forced) resigning matter so short into his new role? Or will Captain Steve take a leaf out of Boris’s book and stay loyal with his new man? Oh, you want to know what its all about?

The person in this photo wishes to remain anonymous in case of possible recriminations, but this injury is the result of, as one witness claimed, a very careless act of driving’ and as another put it ‘a golf swing that was just well…….ugly” Anyway the court is likely to be asked to protect the golf community from such appalling looking swings, and will no doubt  request that the accused be given a 2 year ban on the use of his driver!


NB Being very caring of course we did also check on the persons leg which, despite the bruising was, she said, ‘fine’, and we have to report that she did take the incident very well indeed and was seen still talking to Bill after the game. I expect Lisa’s (oh, given it away) grandchildren are very impressed with her injury. And Lisa also offered some mitigating circumstances  as the ladies were in positions rather too close to the teeing area. )

Seriously, we hope the leg is Ok Lisa and I have to say you really did take the whole thing in very good humour. Sorry Bill!

​Right this is about the golf isn’t it.

A bit of delay in the food being served up allowed Liz and Steve (with lots of backroom help from Chris Vander) to get on with the results and prizes.

These are tabled below in full.

44 points was obviously the high ceiling set and 3 pairs managed to get just that.  So the top 3 were divided by count backs with the 3rd pair unfortunately missing out on a prize spot.

Even stranger than the shared scores, was that in the earlier May 21 Ladies and Seniors Comp the top 3 were also locked on 44 points.  Stranger still (what influence is at work here?) a Cormack was in the top spot ( Barbara in this case - could be a factor?).

A very well done to Angie Long and Dave Cormack in 1st and Lorna Cooke and Ray Wells in 2nd with big commiserations to Carol Mumford and Graham Robson. 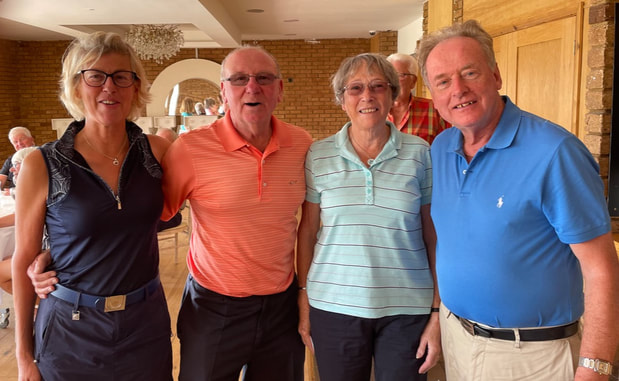 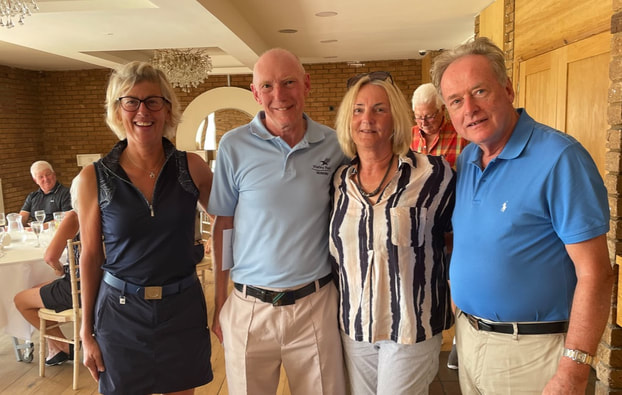 The No 2s
Kim Hansen just back from a ‘breakdown' in Cornwall was helped out by the ‘in-form’ Viv Sandford for the best front nine prize AND low handicapper Graham Robson was also helped out by Carol Mumford who took the back nine prize. 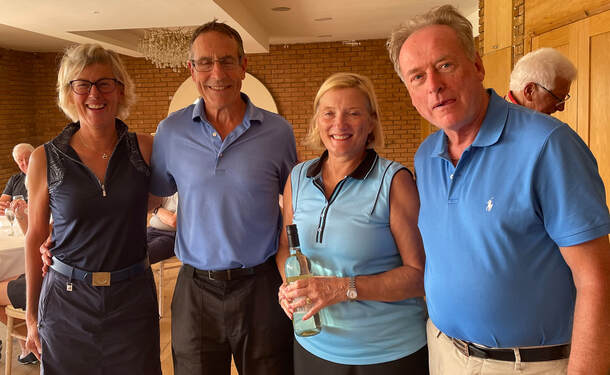 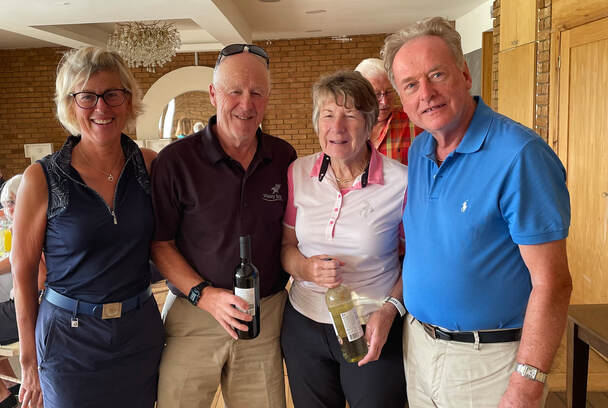 The Back Niners (and unlucky 3rd placed)
Nearest the pins were :

Ladies
4th  Sue Allen (my leading by example is paying off! cough cough!)
14th. Chris Severn (I saw that one - great shot)
​
​Seniors
Now as mentioned above, Wilco and Robbo were battling it out for the NtheP honours but fortunately they didn’t need to fall out as:
7th Brian Wilkins
18th Graham Robson 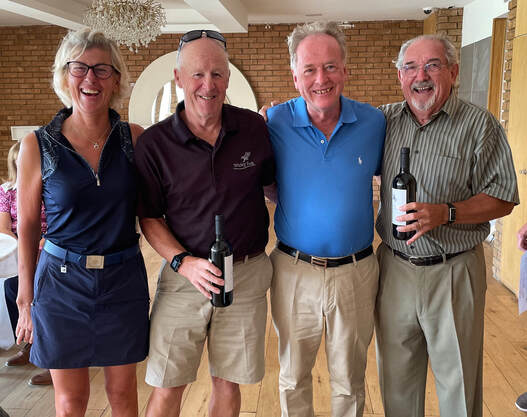 Robbo 18th and Wilco 7th Nearest the Pins
And just to finish off their sagging confidence, the Captains decided to award prizes by naming and shaming the two lowest scoring pairs.

Maureen Walker and Bob (7th iron putter) Brookes. 28
And
Jan Stewart and Mike Tringham 30.
As we all know there were a few problems with the ‘chips’ which rather oiled - sorry, spoiled, the meal for some, but that is being resolved amicably with Get Golfing.

However, none of that got in the way or spoiled an excellent day which was enjoyed widely - some stayed on to have  coffee and chat late into the sunny afternoon - a rare opportunity this year. Let hope for that again next year.

As usual our collective thanks to Liz and Steve for arranging a great day. Looking forward to next year already.
Results Table