​This seasons final event saw 20 members visit Crondon Golf Club on a reasonably settled day although with a chilly "easterly."

With the current leader John P. resting on his laurels, it was left to Spiggy to muster 40+ points to beat him. He was due to lead out with the "yellow jersey" but Robbo advised it was still in the wash.

The order of play, as usual for the final event, was in reverse order with the hope that the last 4 ball would spark off one another. Unfortunately, they ended up in the middle of the pack around the 30 point mark.

The day's winner, with a very creditable 40 points, was Don Buckingham, with Ash just a point back on 39.

Greg completed the podium with 35.

With the cost of these events now requiring a contribution of £60 or so,  I thought I would reduce the number to 3 for 2022/2023.
Richard did remind me that during my predecessor's time, Allan Appleby used just 3 rounds.
We would still use the 2 out of 3 principle for the champoinship

I have already booked Orsett for Wednesday 2nd November later this year , others to be advised in due course.

​Our congratulations to John Powell, the the overall winner this year, and to Spiggy in 2nd place.
I think I might have the trophy, but if it is still in another place please let me know!

NB We had 32 players and 72 games, so an average of just over 2 each. Hopefully in the next round more players will make all 3 games. 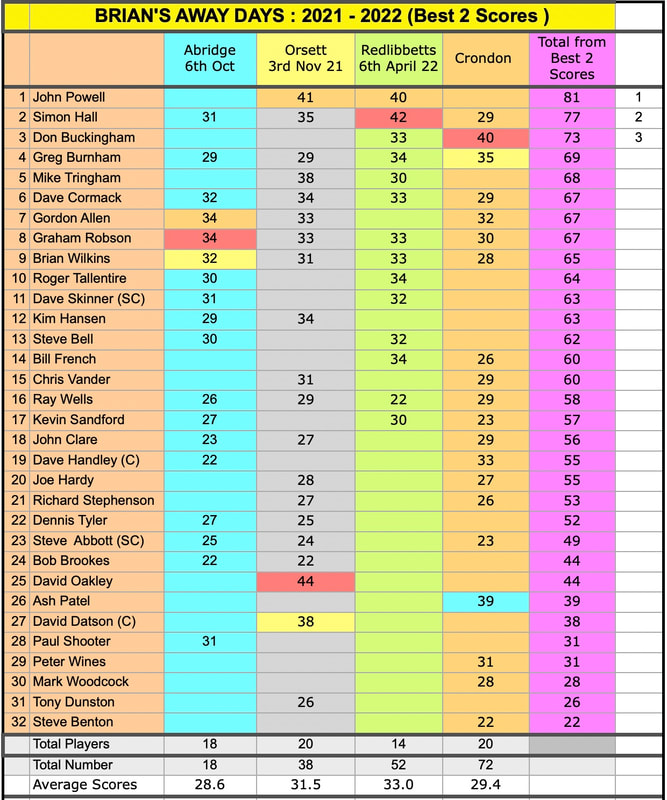 Redlibbets GC : Wednesday 6th April 2022
There was a report of a few nose bleeds as we crossed the Dartford Bridge, but not too many other hitches, just a few different routes to the course.

Weather was drizzly and decidedly chilly, but not too bad as mid 30 points were scored by a few of the players, winter rules still being played.

With Robbo's late inclusion he donned the "yellow jersey " and duly led out the troops.

Pace was good with 4&1/4 hrs for one of the 4 balls and other groups around that mark.
Some of the participants hadn't visited before and there were some positive thoughts on course layout and condition. Certainly worth another visit

The Stake / Steak and Ale went down well and generally a good days golf.

The scores are below, but Spiggy came in with a masterful 42, with John P on 40.
That puts John on top of this years table with 81 points and Spiggy with 77.

Bill took the nearest the pin on the tricky 8th hole just outdoing both Greg and Roger.

As mentioned 32 - 34 points was a common score so generally the course didn't beat us.

With John unlikely to play the last of the 4 for 21/22 at Crondon, Spiggy will have to get 40 + points to topple him, but, if playing, Dave Oakley could be a sneaky outsider.

The details for Crondon will be out shortly (a sheet going up on the notice board on the exit from the changing rooms).

I have already booked Orsett for our 2022/2023 season on Wednesday 2nd November with the others, tba, trying to keep the costs to around £50.

I get the feeling that members are still happy with these events over the winter, not taking  anything away from Ash's excellent days.
​
Brian 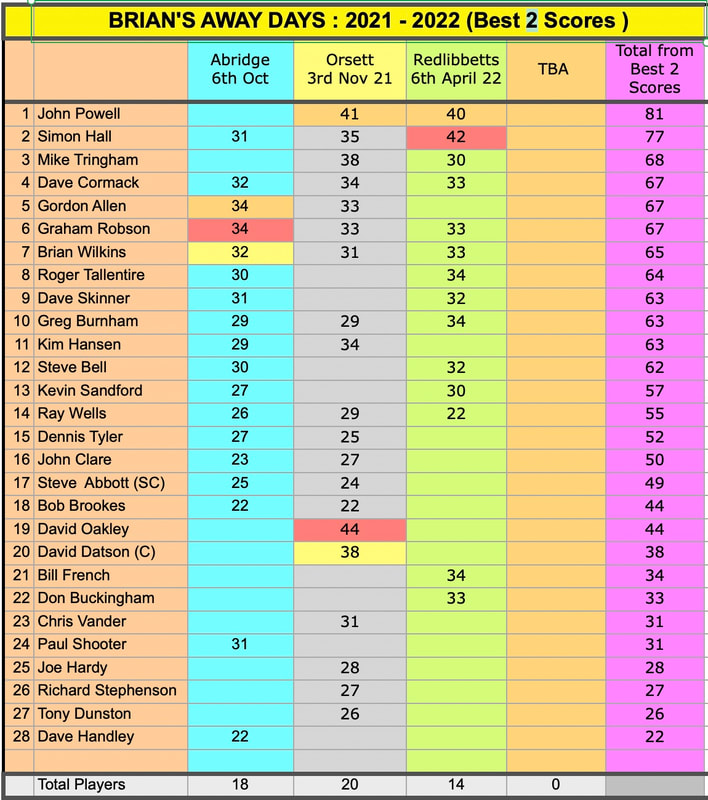 Orsett Golf Club Wednesday 3rd November
A bit later start at Orsett than usual, but all 20 arrived in good time for their bacon roll and coffee under clear blue skies.

We were honoured with 2 Warley Captains, with Cap'n Dave joining the merry band of travellers.
As far as I am aware nobody lost their way, or visited another course by mistake ???
Tony Dunsdon joined us at short notice, thanks Tony, whilst Robbo found an illusive "yellow jersey" as leader of the Trophy. It was great to see Joe included in the field again

The course was in excellent condition, no winter wheels required, although preferred lies were in place.

All 4 of the top places were taken by first time appearance members.
Dave Oakley put in a 44 pointer whilst John Powell carded a 41. The Podium was completed by Cap'n Dave (38) after his back 9 of 19 bettered that of Mike Tringham.
Our winner also managed to beat Robbo to the nearest the pin

I have booked 2nd November 2022 for our next visit after favourable comments from most everybody.

The leaders of the Trophy (best 2 rounds out of 4) are Robbo & Gordon with 67 (both with 34 & 33 points). As mentioned, Robbo had the privilege of wearing the "yellow jersey " at Orsett, so I thought Gordon could have the honour at Redlibbetts on 6th April next,  mind you,  I don't think it would fit many more of us !!!!

The 4th meeting is still to be confirmed as I am finding it difficult to keep the cost down.

Deductions for money only @ Redlibbetts or when they play next are :- 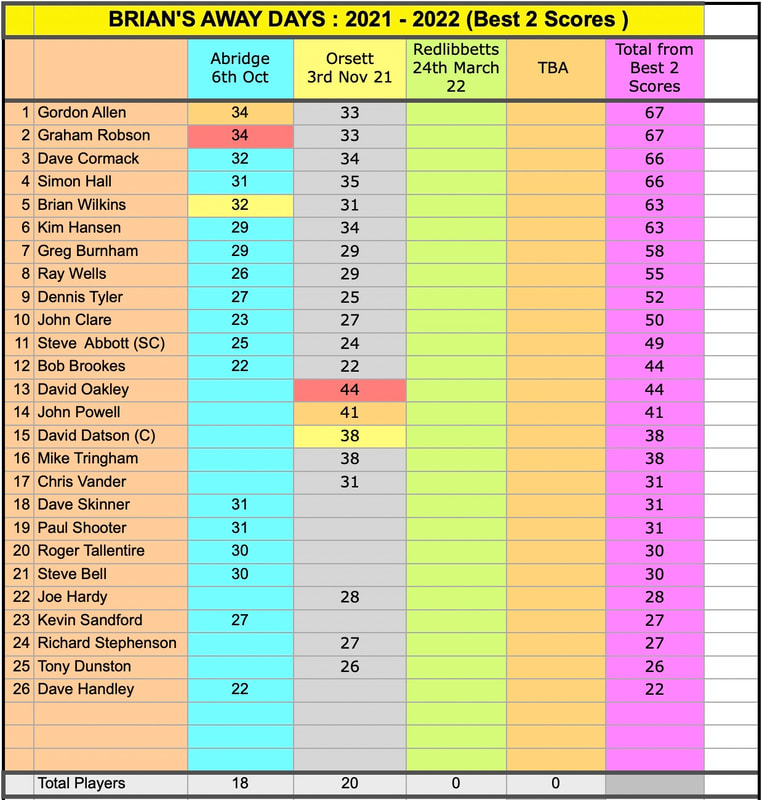 Abridge Golf Club 6th October 2021
​After calls to the club, following the rains earlier in the week, it was confirmed that our visit to Abridge was on.

One member, however, had passed the bridge at Abridge and advised that the flood plain was nearly covering it. The players, however, were pleasantly surprised at the condition of the course.  Preferred lies and bunkers designated GUR did prevail.

The weather was kind to us with sunny spells although sometimes a little draughty.

One member tried to get a second bacon roll before playing, by trying his luck at Toot Hill on the way, but managed to find his way in time.

Play was at a good pace despite of lack of roll on the fairways, if you found them.

The winners carded 34 points with Robbo just taking it with a back 9 of 17; Gordon took the second slot.

Yours truly filled the podium with 32 beating Dave C with a back 9 of 17 against 15.

Nearest the pin on hole 9 was filled by Dave S.

A penalty of 3. 2. 1. will now befall the podium members for prize money only on their next visits.

I hope to have all 4 meetings during the 2021/22 season. Already booked:- The Orsett entry sheet will be put on the Senior Notice board at the rear entrance of the gents changing room.

Please enter as soon as possible as maximum 24 allowed and 8 already entered.
The 4th event will be notified shortly.

Brian
PS what ever happened to the "yellow jersey" 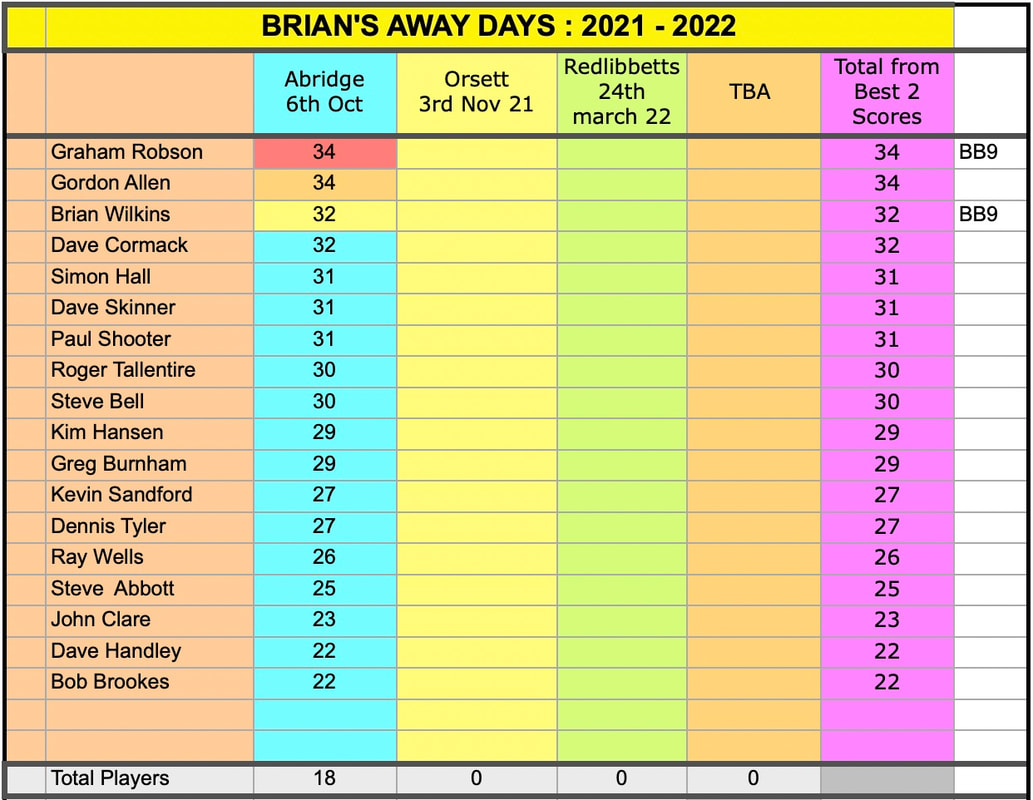