​Only the bare minimum for the swindle today as some Seniors decided to top up on the brownie points. A huge improvement in playing conditions didn't make any real difference to the scores. All seven started off with the intention of taking over from Ding Dong as the highest individual swindle scorer of the year, but all failed miserably!!!!
Dennis continued where he left off at Brentwood on Wednesday with a decent score of 39 points which was far and away the best score of the day and got him £5 and a cut 2.
​Runner up was Robbo who managed to win £2 and get cut 1 for the third time this year.
The good news for some is that trollies are back on as from tomorrow.
​Robbo 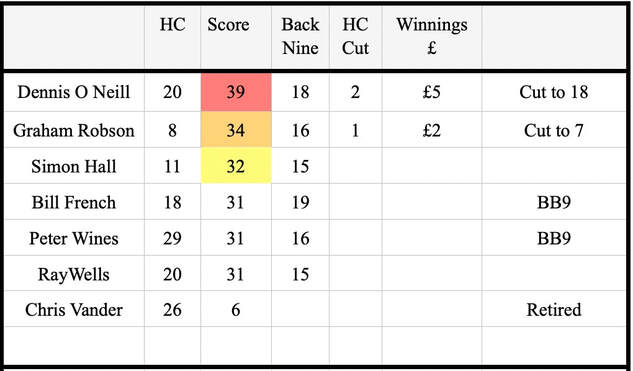 Results for Wednesday 19th January 2022
Eight of us turned up this morning.  Good weather early on. The first four ball was myself with Mike Tringham, Kevin & Belly. The writing was on the cards when Kev & Belly both parred the first. Belly didn't stop there paring 3,5,7,8,9 for a first nine total of 25. He continued on the back nine with five pars and a birdie on the 13th ( 4 for 5 ). Having reached 49 on the 18th tee box he unfortunately drove into the pond . Having chipped on the green for three he putted to three foot and then missed; for what would have been a magnificent 50. A gross 77, net 56 round . Mike kindly bought the coffees.

​(Thanks to Ray for organising on the day and writing up) 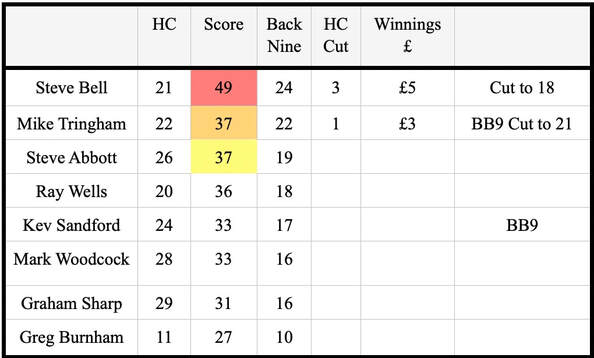 Results for Monday 17th January 2022
Unbelievably, considering the weather we have had, we have still managed to have six swindles this month. If we keep going at this rate there is a chance that we will end up playing 100 swindles by the end of the year!!! Leading in the swindle appearances for 2022 is Ray with six with a whole host of others chasing him with five.
The late entry last night of Sharpie paid dividends for him as he made the most of his first appearance of the year to win with 40 points. Spiggy continued his very consistent start to the season with a second place by edging out Robbo on countback, both players having scored 39 points. 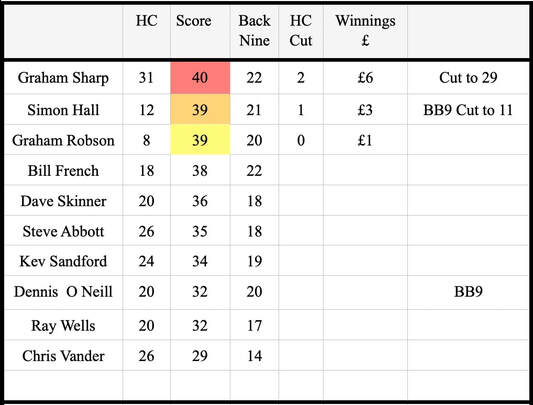 Following the experiences of many of the players in Wednesday's swindle it was no surprise at all that there were a few drop outs for today. There was the bare minimum required to play a swindle (seven) and so shortly after 8a.m. we set off to play Warley 1 to 18. It has to be said that following the cold temperatures during the night the ground was quite frosty and a lot easier to walk on. In addition, it was another beautiful sunny morning which resulted in much more pleasant conditions to play in. It was still tough going, but better than staying indoors watching day time television!!
Congratulations go to Spiggy who played extremely well to record an excellent 40 points.( £5 winnings and cut 2); Robbo just managed to nick second place off Gordon with a birdie on the last. His reward was £2 winnings and cut 1)
Let's hope the forecast of no rain for the next 10 days is accurate and the course continues to dry out. 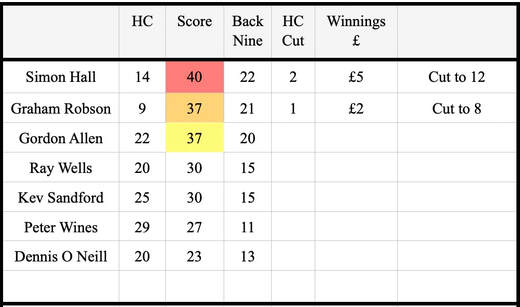 Blue skies, no wind, no fog and not cold. Perfect weather to play golf on a mid January morning you would think. How wrong can you be? With yet another day of rain yesterday the course was even wetter than on Monday and, as a result, the majority of the 14 swindlers who played found it extremely difficult to score points. The major contributing factors to the lower than average scores were lost balls as a result of the leaves, the sun or being plugged in the soggy conditions. Highlight of the day in our fourball was the new Seniors captain sinking a 20 foot par putt on the last. There were mixed views about whether we should be playing on the course in its present state when we got back in the clubhouse. Some were happy to get out of the house and get a bit of exercise whilst others stated that they wouldn't be returning to play until the conditions improved considerably!!!
Congratulations go to Dennis, Dave and Kev for finishing in 1st 2nd and 3rd place respectively.   Their scores were extremely good considering the difficult course conditions Well played guys.  [Ed note: Having played with Dennis and seen first hand the 3 bunker shots that came out 1st time I've cancelled my gift order for Hamlet cigars for him and he won't now have time to smoke them as was the case in 2021.....!]. 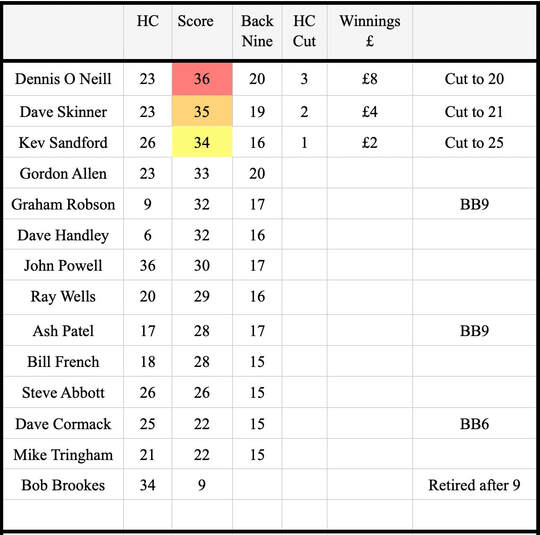 Results for Monday 10th January 2022
With the latest deluge of rain forcing the closure of Warley 1 to 9 holes the swindlers took to Childerditch once again. As a result the scores were not quite as good as they have been recently, but they were still fairly impressive. A good turnout saw 14 play the Swindle and 8 battle it out in the Winter Doubles competition.
Having just returned from a month or so in Portugal, last year's star player Greg wasted no time in picking up where he left off and won the Swindle with a wonderful 41 points. Close on his heels were Mark and Gordon who scored 39 and 38 points respectively. Unfortunately our new captain Dave just failed to pick up any prize money having lost out on countback for the second swindle in a row. (Ed Note: Get used to it Dave - Captain's curse).
Robbo

Results for Friday 7th January 2022
Some people are just glutton for punishment!! Despite the adverse conditions and weather on Wednesday the hard core swindlers were back in the clubhouse at 0745 prompt ready for the draw for the second swindle of the year.
​Well, almost all of them. There was one notable absentee - a certain Ash Patel. No, he hadn't forgotten his shoes, nor his trolley and not even his clubs. You guessed it- he had forgotten to wake up!! Only a call from Chris V managed to stir him from his slumbers, but by then he was far too late to contemplate playing. I expect that the next time we see him he will produce a note from his wife saying that he had forgotten to set his alarm clock!!
A couple of other late drop outs, both for very valid reasons, left a field of ten to compete for the big bucks. The scores were extremely varied to say the least as the conditions yet again caught a few people out whereas others flourished in them. Gordon and I had an extremely enjoyable and very close match against Bill and John C . It went to the last hole where Bill sank an excellent birdie putt from 15 feet to win it.
As if that wasn't good enough, his birdie took him to 47 points - a score that many people don't get in a lifetime!! It was an absolutely fantastic round in which he didn't have a blob and scored at least two points on every hole. Needless to say he was a long way in front of anyone else. Robbo scraped into second place with 40 points,  one ahead of our new club captain Dave Handley who scored 39 points. This was also an exceptional round as he was playing off a handicap of 5.
It already looks as if 2022 is going to be an interesting Swindle year. 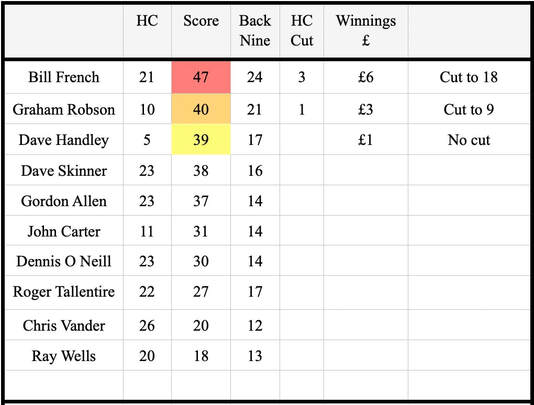 The 2002 Swindle proper got fully underway today for those who were foolish, or brave enough to venture out and tackle the Warley 1 to 18 course, without the aid of a buggy or trolly. For those who played some chose to carry a full complement of clubs, whereas others just took the bare minimum. It has to be mentioned that a breakaway group of Seniors cribbage players organised by Roger aka Sarge could be found enjoying themselves in the warmth of the clubhouse. Rumour has it that if the weather and course conditions remain the same in the imminent future he is looking to start a board games club, featuring all the old times favourites such as Ludo, Snakes and Ladders, Monopoly and Trivial Pursuits. All those interested will be required to inform Roger by e mail before Sunday.
One of the final tasks for our outgoing captain Steve was to select the Bandit of the Year. There were a number of candidates, but in the end he plumped for Kevin and to prove his choice was absolutely correct you will not be surprised to hear who won the first swindle of the year. Congratulations go to Kev for a great score of 40 points. He just pipped Ash who had 39 points (including 2 blobs and a 5 on the last hole). Getting his £1 back in third place was Robbo with 37 points.
​Robbo 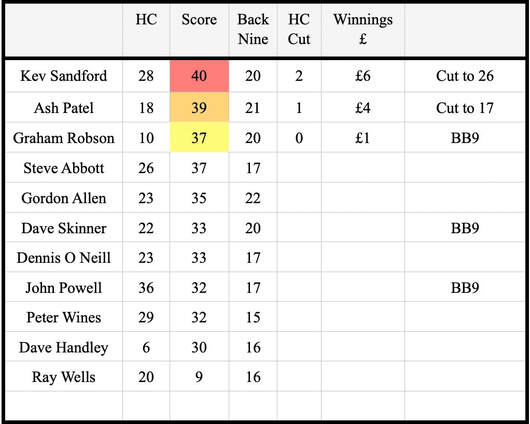