We feel as though we are in the mid season break as competitions are less frequent at the moment giving everyone the chance to get their knock out games in, or play in the friendly matches against other clubs. It also means injured or resting golfers can get a few days holiday in now the weather has improved.
You may not know but KP went to Portugal recently where he could relax and write poems. Oh you did know as of course we all got the email as Kevin asked for an early start. I hope burglars don’t read fantasy news. Many didn’t understand why Mrs Price couldn’t get things ready, but I must admit I pack my own case as otherwise I would find shirts like Dave Handley wears in my luggage. 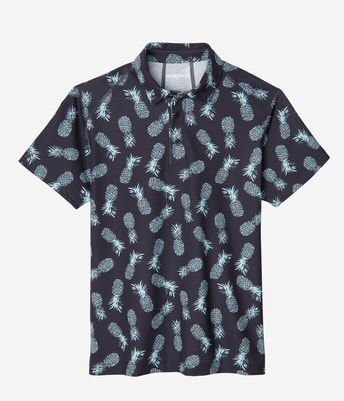 Gordon has got a new fancy shirt too now which I think is the style Justin Rose wore in the USPGA and my wife said 'why on earth is he wearing that – he is too straight laced to be fashionable'.


(The web editor begs to differ of course!)


Justin Rose's whimsical prints for Bethpage. Modelled by Gordon.
The latest competitions were the Golden Days Trophy where low scoring saw Cinderella Shooter claim the cup on count back from Trigger Crutchett and the RK Trophy that saw another triumph for Guy Burgess, who knew all the secrets of the course and landed a 44 point score in a high scoring competition.  Skeels and Hansen who both got 41 points were unlucky not to win. Well played to all.
The GOY competition now sees PB with a handsome lead and he won’t need an early tee time as holidays will be cancelled.
And now a riposte, although perhaps Kevin​ would like a regular spot in FN.
​
There was a old man called Price
Who fancied himself as a poet
Secret words about me were precise
But I knew jolly well who wrote it

In the Fantasy league Robot is back in top spot after the signing of PB and lots of managers are now spending their transfer money except of course Gordon who got his £1 ready only for his mother-in-law to swallow it. Yes you heard right.