Lots of pre-planning and effort on Wilco’s part got 18 seniors lined up for what has become an annual Senior Captain’s event. In this case Steve’s choice for the overnight trip was to Tudor Park with 2 games of golf.

All pre-tour fears about fuel availability and crossing the river drifted away, and we all sailed over the Dartford crossing with no hitches arriving in good time to stock up on breakfast and coffee.

Some of the group, who were maybe more used to dealing with snoring, or fighting over bathroom time (!) shared a room, with the more delicate of us taking the easy single occupancy option.

The 18 players had been allocated to one of 3 handicap groups, ready for the 1st day draw into 3 person teams.  A bit of a false start and the bingo style session got going. As far as we could tell the draw was fair - no magic tricks yet-  although we were surprised when the South Essex team +1 came out together!

Fine, if a little unexpected, weather resulted in a very enjoyable first round on a course rated more difficult than Warley Park (so more shots for some), but which most found relatively kind, with limited water and other hazards - providing you could keep the ball reasonably straight of course!

All had to wait for the 1st day results until the evening meal was over, but took the opportunity after the golf to sample the local beers and wines - some more than others.

Its customary of course that what’s said or done on tour stays on tour, but ……………….no compromising photos and I can’t think of much that happened actually, although Dennis seemed to have started his party tricks early by disappearing.

A good menu choice was offered across the 3 courses and most seemed  to enjoy what was provided. Especially the ample bottles of red wine allocated to each table very generously by Captain Steve.  Timing is key in entertainment skills and Dennis obviously waited until observation levels amongst his audience were at a low level (or high alcohol level) before he entertained us with his close up magic tricks. He certainly seemed to know how to make £5 notes disappear quickly and magically re-appear in other places - It was helpful that he had a cigarette packet to call on as no one else did. My main concern of course was that the £5s he was trying to lose were those designed for my pockets as a result of all the £1s he owes me from the Swindle!

Meanwhile, Captain Steve had quite rightly also enjoyed his own wine to a high standard of commitment and the ship was really rocking when he stood up to give the days results out.

The Team and Individual results are set out below.

I had the pleasure of playing with Ivan and Temp Captain Bandit Sandford - I say temp because there are a few others now lining up to push him off his high chair - isn’t there Mark, Tim, etc - Oh and even Dave Skinner is making a comeback for bandit honours. Anyway Kevin did play rather well on day 1, although Dave edged him into 4th on countback, by taking 3rd place behind Mark on 38 and Colin with an excellent 41.

Captain Steve was very happy handing out the Day 1 prizes, along with some very heavy handicap cuts - I hate to think what happened when he was a boss making ‘savings’!  Poor Colin ended up with a cut of 6 shots and nearly fell - no not off his chair - but into the ‘Kevin Price’ trap!  (You had to be there - Kim’s softer side came out as Captain - yes he does have one - when he handed out shot cut, after shot cut, to KP for arguing on a previous tour!). Even Kevin got a two shot cut and he was just minding his own business!

A very enjoyable first day and evening all round. 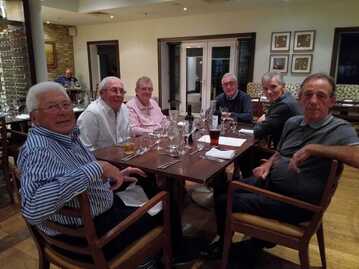 A hearty breakfast the next morning and a gathering for the next round. Day 2 was in mixed up teams, but with each  individual score counting towards their team scores, ie so that no-one knew their team overall results until the very end of play.  I had the pleasure of Chris V and Tuck Shop Stan’s company on day two. Despite leaving WP Stan seems to have retained his Tuck Shop operation - although I’m sure the Mars bars have reduced in size!

The weather was a little bit more mixed on Day 2, but what rain we had was over pretty quickly and didn’t impact on play much.

Capt Bandit Sandford showed his true colours by amassing 39 points after his 2 shot cut. Chris V had played very well and took 2nd place with 37 and my other playing partner Stan took 3rd place on count back with 35.  I felt disappointed !

So on combined scores the Individual winners over two days were (imagine feigning surprise here!):

Captain Steve - we’re told he was an accountant - after a couple of audits, managed to get the team scores sorted and the team winners were revealed.

Oh no, it wasn’t that, it was a very good combined score of 205 by Brown, Tillet and Woodcock with a bit behind on 199 North, Allen and Sandford.

Lots of un-corked wine and balls handed out, with a free ‘Russell” lesson for the last placed. - unnamed!

As part of the package everyone had paid £5 into the '4 pointer pot' ie anyone who 'stole' 4 points on a hole earned one share of the pot. There were 12 x 4 pointers, each worth £7.50.  Unfortunately, only 5 winners, with uncrowned bandit Kevin taking 5 of them, Colin 3, Roger 2, Brian 1 and Steve himself 1 - there had to be some return for all the hard work involved.

The conclusion of an excellent two days of golf and ‘other things’.

Our thanks to Steve (and Brian)  for all the planning and organisation, and to Steve's very generous contributions to make it a very enjoyable experience all-round.

Just to prove how enjoyable it was, when have you ever seen Bob so happy!! Certainly wasn't his golf! Although I suppose it could be that he was about to leave!!
​
​Editor 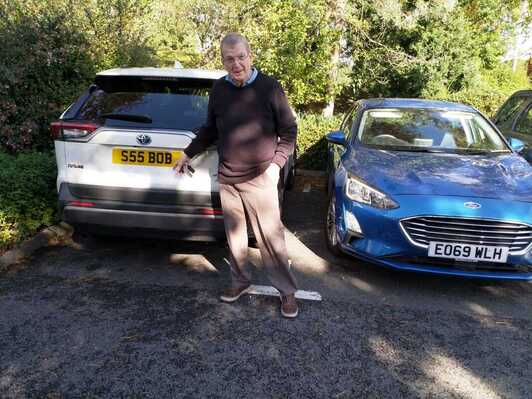 Team Results over the Two Days 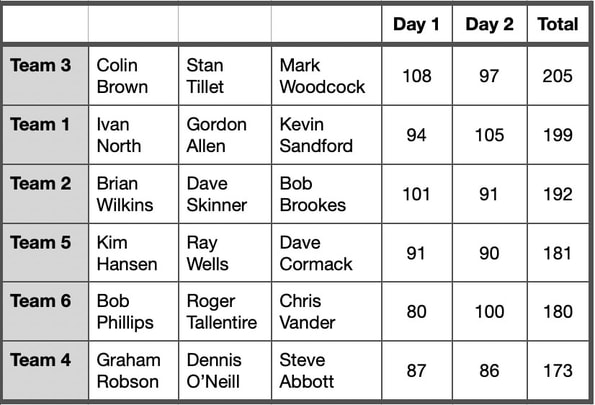 Individual Results over the Two Days 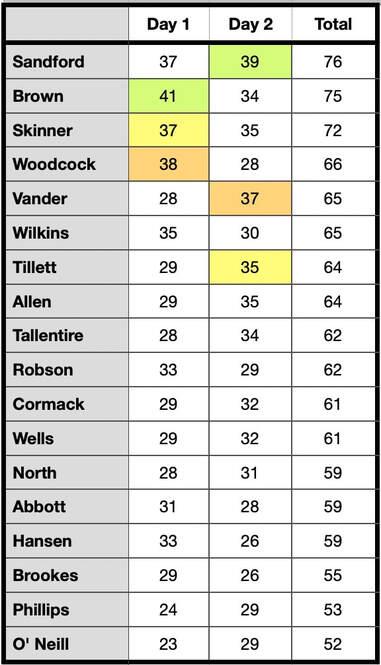