As many will remember, the first Ladies and Seniors of 2020 was played as a very successful virtual event. Its rumoured that the two Captains, looking to modernise our golf further, decided that playing under ‘Chapman’ rules was just little to male concentric, and so we played Betterball instead - also less touchy, feely it was said.

Planned as an outdoor event, followed by a BBQ, the weather was kind and, although rather windy, stayed dry for the day.

The course was looking very much better and one of the benefits of the wind was that certain un-named individuals (Steve, Roger etc) couldn’t be heard on other parts of the course!

Who would have thought that WP was such a place of social learning, but a deep philosophical discourse took part on the separation of partners. Most husbands and wives seemed to have tee times that were well spaced, testing decisions about whether to share cars or not.  Such apparently small decisions can lead to very differing views. Many thought closer tee times would have been good, but of course some car journeys can be tense affairs just before a major competition! On the other hand it gave the ‘first in’ partner time to go home and let the dog out and have time to come back again.  Conversely,  some felt that golf was fundamentally a way of providing space in relationships, so why would you want to be placed too closely to your partner……… and so on.  I won’t mention names for fear of being named in legal papers, but I do have some recordings of those conversations if the fee is right! Kevin?

I had the good fortunate of playing with Brenda Tyler.  As I said to Dennis afterwards, he must be very proud of the fit young woman she is, as she had to carry me mentally and almost physically around the first nine, as after the 1st couple of holes, my contribution was more ‘black hole’ or invisible.  I did buck up a little for the back nine, but at no stage did I reach cloud nine. Our playing partners Kim Hansen and Pam Gilley meanwhile got off to a very good start, although Kim had dragged Mary-Anne off the previous week for an intensive golf training-playing session beyond the wall of the North and Scotland, so might have expected to perform well in our southern climate.

Dave Skinner started the day well. I know this because as we were all putting on the 4th green a ball appeared from the 1st tee, causing major damage to Kim’s golf bag (insurance claim pending and Kim is in discussion with Ash for advice) finishing closer to the hole than my own ball. Apparently the best of it was that it was Dave’s 2nd ball off the tee. I’m sure we heard an ambulance siren around that time …..?

I had rather hoped that as I had a bad day, my wife Sue would have done better, but later in the bar Robbo informed me that he got the blame for her putting a ball into the water on the 7th.  He wasn’t quite sure why as he was standing behind having just come off the 6th. I had to remind him that good team work occasionally involves taking the blame for your colleagues mistakes and as they had managed a large school together for many years he should know better than question decisions of that kind.  And anyway I might know something about taking the blame!  I gather she did actually play rather better than me, but that is all rather relative if you look at our team scores!

It wasn’t perhaps the quickest of days on the course and some of those that had earlier tees were seen to be going up for 2nd burgers as the day lengthened! The BBQ actually worked very well and the Wednesday national £10 /50% discount scheme made those 2nd burgers very attractive…..

Steve and Liz (who, unable to play because of having had an operation to her hand, had shown great commitment by walking the course with some of the ladies) gave out the prizes with the minimum of fuss. At the end Steve did very uncharacteristically open up to us all with what we took for a rather dramatic and slightly sad personal declaration ‘ I just have a little something …. ‘  before turning and abruptly walking off inside the clubhouse. There was some embarrassed laughter and a little amazement, but then he came back holding a rather large orchid for Liz. That Abbott, he does know how to shock us!

Two very good 45 point scores were only separated by the BB9 rule and so Roger Tallentire (carried by his partner he said) and Angie Long etched up a very good win, just, over Graham Robson and Chris Wilkins. Bad taste warning for a Roger T : Best female quip of the day - Roger, after Angie has just sunk a putt for 5 points, "if is wasn't for Covid-19 I'd ravish you"  :  Angie (I'm seeing deadpan..)   " THANK GOD FOR COVID-19". Excellent!

By now the day had moved on quite a bit and and there may even have been afternoon teas out - on the tables, not the course.

Our thanks to Steve and Liz for making the event happen and to all those who undertook a role on the day. A very enjoyable event indeed and hopefully we can find ways to keep events like that going in the new set up.

Note:
Steve also gave out the prizes from Simon and Jeanie for the winners of the Virtual Ladies and Seniors event that we enjoyed earlier in the year. Sad to say though there was no personal appearance by the Shooters as Best (UN) dressed pair. Thank you guys and best wishes from us all to you Simon on your road to recovery.


Below are the scores and winners in the various categories.  Also one or two photos kindly provided by Paul (he of the table clambering kind) Unfortunately not everyone could stay on. 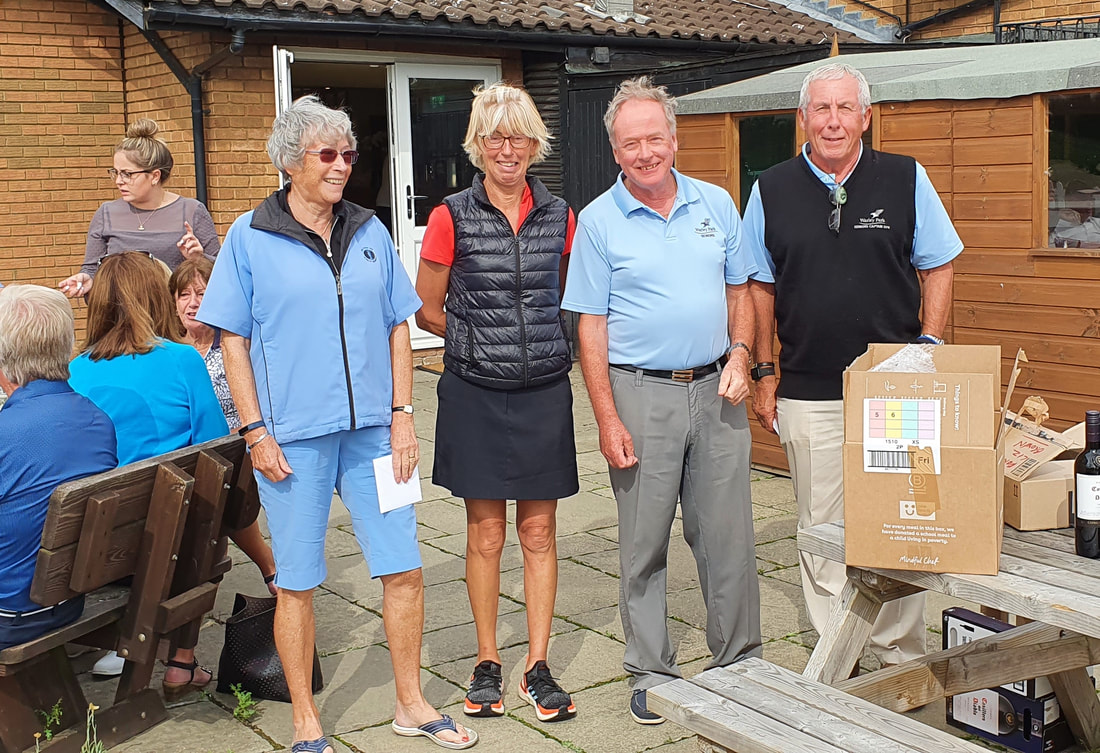 I think Roger has just said a 'Roger' judging from Liz's face!! 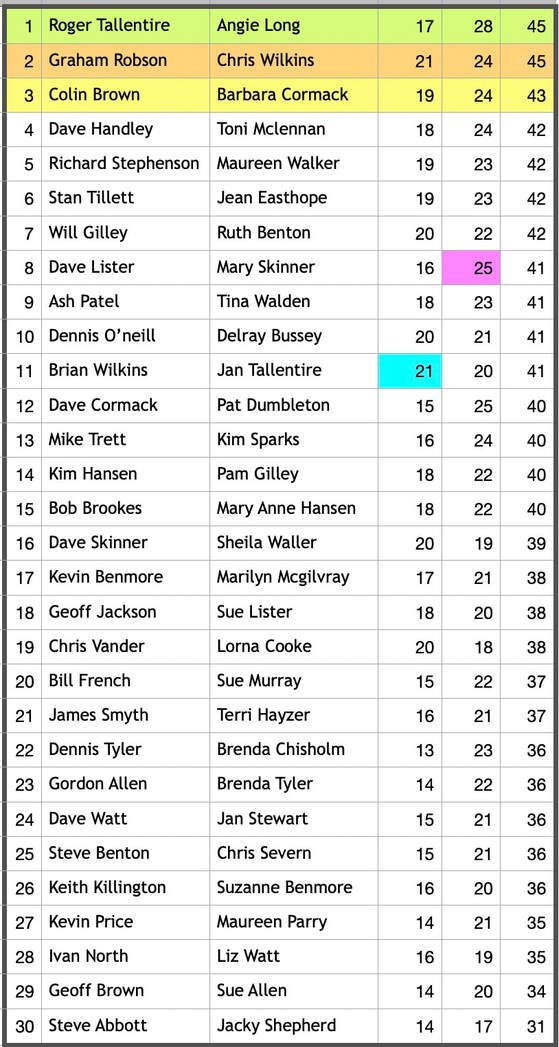 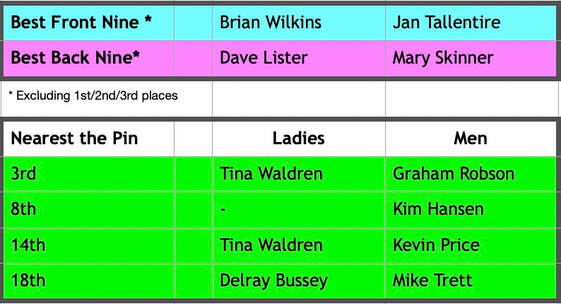