We all dripped our way to Crondon and continued dripping on the course -- we used extended Winter Rules which proved very useful. The greens weren't as good as at Warley and the general course conditions were certainly no better than at home. We had 3 new players making 43 over the 4 rounds -- thank you for your support (Dave Skinner & Bobby Doe making all 4)
Greg, Simon and Bobby had a match play situation in the last pairing, to decide the Annual Trophy (Robbo keepng his powder dry ,elsewhere). Greg just got the better of Simon and both were 1st & 2nd on the day with Dave Skinner making up the podium (scores are in the table below)
Will proved best at nearest the pin in 2, whilst Chris V. was nearest in 1.
I will try to fix the dates for 2018/19 as soon as poss, although some courses won't have their costs organised yet.
Thanks again for your support -- I think John Clare has the "yellow jersey", keeping it warm for next year -- wish you well. John
Regards
Brian 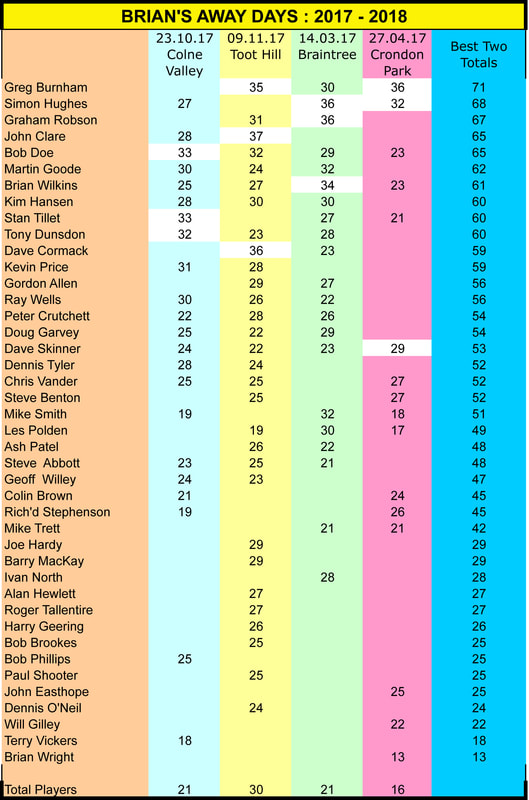 After a few found the traffic a little delaying, the 21 players all arrived for their bacon roll and coffee.
We couldn't believe the sun was out, there were raked bunkers, bouncy fairways and pretty true greens.
A bit of a novelty we thought!!
The 113yard par 3 , 10th hole was chosen for the nearest the pin and Les Polden took full advantage.
I think we all agreed that the course was in excellent condition and 8 players had 30 or more points.
Robbo and Simon tied with 36 points (Robbo's 18 back 9 just snicking the first spot ) with yours truly on 34, other scores are in the table on the web site
Our last meeting @ Crondon Park on 27th April will be a shoot out, with top scorers: -
Robbo          67       31 to beat, to improve his 2 scores
Greg            65       with 30
Bobby          65       with 32
John Clare   65       with 28 -- hoping he can get to the starting line
Simon          63       with 27
I will be putting up the entry sheet next week.
We have had 40 players during the 3 meeting and I hope to see the 30 player sheet as full as possible.
Regards
Brian
Report on the Second of the Four 2017/18 outings - Thursday 9th November 2017 -- Toot Hill
Our 30 intrepid seniors found their way to Toot Hill, o.k. although one, Dave Skinner, couldn't find the entry door to the club to liberate his bacon bap. 15 new names joined for the event, making 38 players this year and I would like to thank Joe Hardy for making up the 30 players at short notice. Barry, of course, knew everyone he met, having been a member, so we sent him off first as the lead "scout"
"Ready Golf" was evident, as the first 2 groups were round in under 3 and half hours.
The course was in very good condition for early November with greens and fairways nicely mown.
The rough, however, was most appreciated, by most of the members, with it much more manageable than at Warley.
Next March is our next meeting at Braintree with the April meet still to be finalised.
The table below shows the current leaders in the competition with John Clare & Bob Doe both on 65.
John will be the wearer of the " Yellow Jersey " with his 37 points from yesterday, on best "back 18" basis.
Brian.