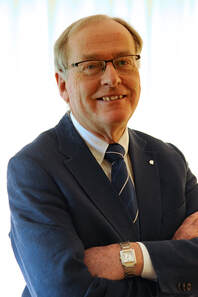 All gathered for coffee provided by Seniors’ Captain, Steve before heading out to play. The weather, course condition and speed of play were all good for a successful day.

A Senior Captain’s drink in the bar after the golf set us up for the following two course meal, the presentation of the day’s competition prizes and also all the trophies etc for the Seniors Competitions that were run in the first half of 2021.

We gathered upstairs for the start. As the 8 ladies that played were not staying on for lunch the prizes for the winners that day were handed out by Steve. A very well done to Liz Brown and Sue Allen on their 1st and 2nd places.

There seemed to be some uncertainty in the air, but the first course of roast lamb was successfully delivered and enjoyed.   Amid much furniture moving and discussions it became clear that something was afoot. Eventually we were advised that ‘wedding rooming needs’ meant that we had to move downstairs to the spike bar to complete our days events. Despite the ‘fiasco’ that ensued, Steve and the Seniors managed to put on a brave face, maintain their good humour and complete the day, with the serving of the dessert, and the presentation of the days competition and half year awards.

The former boy scouts amongst us showed their merits as they appeared downstairs with dessert spoons ready having hastily grabbed them from their tables.

Captain Steve managed to secure one of his own prizes with an excellent shot to the par 3 1st on Childerditch.

The full list of players and scores etc are available on the IG system as usual.

Special mention was made, in his absence to Dave Skinner, on having won the previous years’ GOY title, for which no presentation had been possible previously.

Unusually and unanimously the Club Member Cup was awarded for a 2nd occasion to Gordon Allen for his work to help organise and keep the section together during recent trials.  (And very pleased and grateful he was to receive it guys!).

The prizes for Winners and Runners Up were presented for the 14 comps held in the first half of 2021 - as listed below.

Normally there would be photographs of the guys involved, but the day’s disruptions got the better of us and that failed to happen.

In support of the Captains Charity a ‘guess the total points scored by all players’ sweepstake was run.  £200 was collected on the basis of half to the charity and half to the winner. Richard Stephenson's guess of 1439 was the closest to the actual figure of 1436.  Richard very generously donated his winnings back so the charity gained a further £200 in total.

Captain Steve thanked those who were involved in making the day happen and all those that took part. He appreciated that the seniors group had managed the enforced changes to the day so well and enabled it to be concluded despite the problems.
Winner of Captains Cup and Associated Prizes 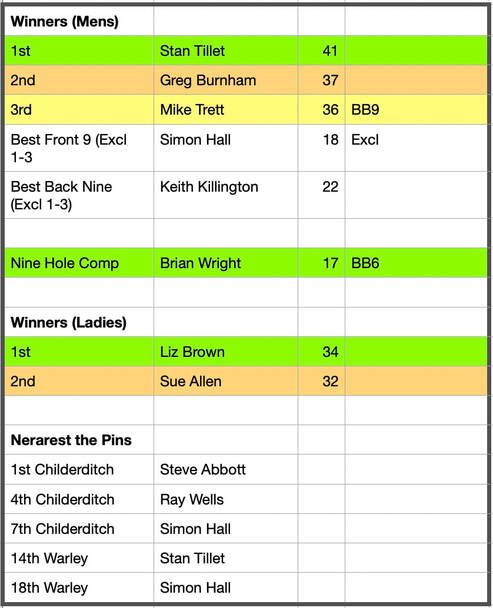 Seniors Prize Giving List for Competitions in first half of 2021 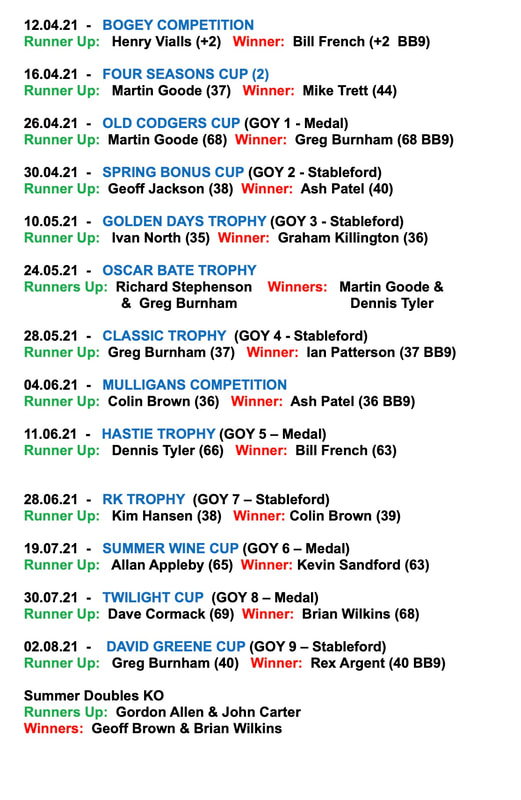