A dry day, decidedly cooler than recent extremely hot days, which all appreciated. A public course in great condition, with very excellent greens, played at a time that suited all and at a bargain £12 per head. True there are a great many trees which is heaven if you are a dendrophile, but less so if you can't hit a straight ball!

There appeared to be no mishaps with arrivals/starts which is pretty rare amongst the seniors. Although Stevie B turned up looking rather paler than usual after his enforced two weeks indoors.

And no shared stories about course antics which makes it sound rather tame. But the 4 ball, of Robson & Allen v O'Neill & Skinner had a very good day and a very close match - although the B team of ONS were never actually in front.  Although Dennis didn't mention his, not so recent, Eagle at WP on Lock Spinney, which was a great disappointment, he did remind us again not to buy three balls and a few tees from a pro shop for c£12, especially when you lose them all in one game! But Dave on the other hand was going to look up tree degree courses when he got home as he had started to learn so much about them on the day. And actually whilst on Degrees, Ash was talking about them afterwards in trying to decide if his New S/H woods were set up in Fahrenheit or Centigrade!

​But the biggest talking challenge of the day was who had actually won. Bobby D and Greg B both came in with 37, both had BNs of 19, both had the same back 6s and 3s, so after much research Ash decided it would have to rest on the best score on the last hole. Bob's 3 points over Greg's 2 points decided it. (I think the discussion over that referee decision will continue). A very well done to both those guys for good scores indeed. And not too forget Dave the Skills good 3rd place 36 points.

A  very well done and thanks to Ash for organising the visit. Thanks also to Graham for doing the draw, cards and prize money. All agreed it was an excellent local visit and the consensus was that we should do it again before the winter weather set in, when the course might become rather harder to play and Dennis might have to buy a box of 12 rather than 3 balls because of the leaves. 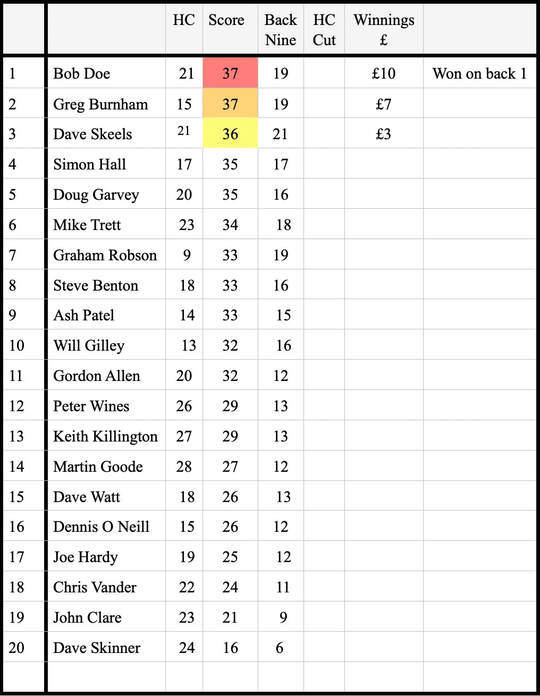