The sun was shining early in the morning and the forecast was for the odd shower in the afternoon, so we were hoping for a good golf day.

No hiccups in people arriving at Top Meadow, however we did have to sit one per table for the  excellent full English breakfast.  It worked fine as we were the only ones in the restaurant and it got a bit rowdy in there as people were making conversation to others that were 20m away.

Suitably fed and watered 18 seniors started on the par 3 1st. As I was teeing off last, I was watching everyone tee shot and I could see the scores were going to be on the low side as not many got on the green. That certainly proved the case with only 4 players getting into the 30's. My 4 ball had to abandon play as the heavens opened up on the 17th and the 4 ball in front also suffered as they abandoned play on the 18th. So the 'dry as a bone' golfers were the first 3 groups and the 'wet as a fish' (Ed. the fish is becoming a theme!) golfers were the last 2 groups.

However, Robbo had already amassed 36 before the rain and beat Bob Doe by 1 pt, with Geoff J taking 3rd place.  Bob has been on the winners podium in 3 of the 4 awaydays. Who thinks we should cut him the next awayday?

Most people enjoyed the day on what was a dry 'ish golf course in excellent condition, certainly not as boggy like Warley. 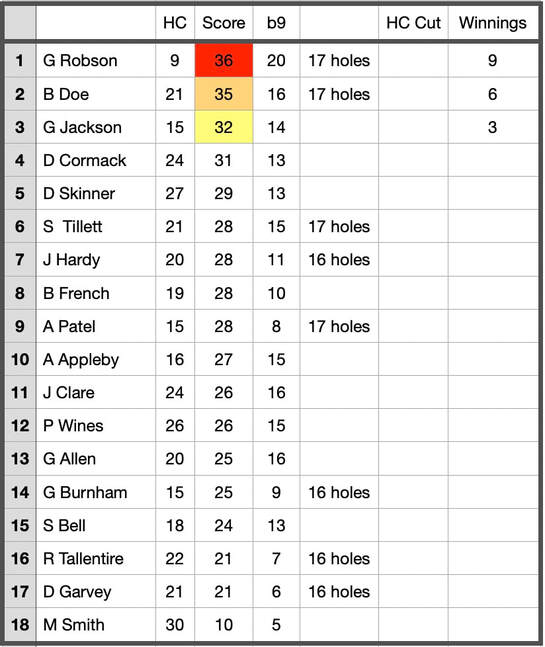