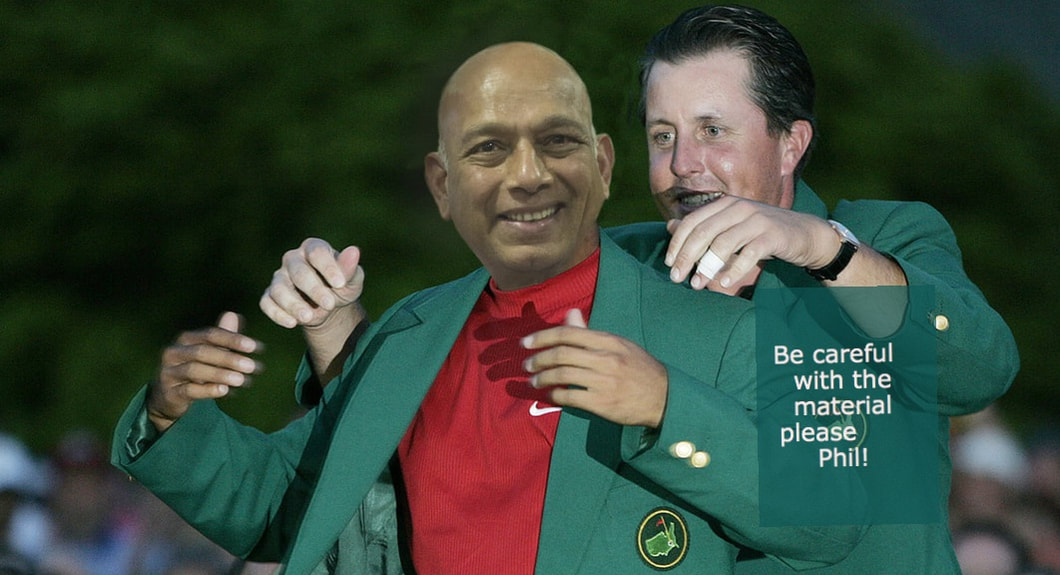 ​As far as possible monthly outings are planned and arranged by Ash to our partner Network clubs which are of course free to play. The format is usually a bacon roll and coffee, 18 holes and a one-course (late) lunch. Tee off times are dependent on each club’s slot availability, but are usually a bit later in the mornings – around 10 to 11. The cost of each day varies, but is kept low (£20 to £25) for the food and drink and some small money prizes. Prize money and handicap cuts are applied for these days on a similar, but not quite the same, basis as those applied for the Swindle. Handicaps do not get reset at the end of the year. At every away day there will be a nearest to pin prize of £3.

The short trip reports for recent outings are set out below with the table of results and table of handicaps
Top Meadow 13th March 2020
10 Warley Park Seniors descended on Top Meadow golf club as it was one of the few clubs still allowing trollies. Kevin Price, who wasn't on the list, turned up to play, so Ash the organiser made a boo boo. Not a huge problem as there was a space for Kevin. It later transpired that Dave Skinner who was on the list didn't turn up. Conclusion;  Ash got Kevin and Dave availability mixed up and that's what turning 70 does to you.

The day was to get worse for Ash as his battery conked out after 9 holes and he had to manually push his trolly around, so his score of 24 was understandable. Again, not great scoring by the Seniors, but Spiggy again took the 1st prize on 32pts and bb3, with the guy who wasn't supposed to be there taking 2nd place. Nearest to pin was Dave Handley.  Now that I am 70 I will soon be heading for a 4 month quarantine period and somebody younger will have to arrange these away days.
Stapleford Abbotts 9th March 2020
4th visit here in barely 3 weeks as one of the few courses open, able and willing to accommodate us! 14 got up for the early 7.30am on start.  Too early for breakfast or coffee even.

Ground conditions were still a little wet, but above ground it was one of the more pleasant days with some sunshine!  Scores were a little better as a result (although not much).

1st place went to Spiggy with 38 points, making it 3 wins/places out of 5 away starts. He is surely a Fantasy League favourite, although his Spanish Incarcerations will make him miss out on some competition fun.  Runner up with a BB9 35 was his FL mentor Sir Simon, recently back to his full HC after taking 2 years to get there because of previous Network day cuts.
​
With a HC of just 2 Robbo failed to get on the rostrum for a change - although we think he is a bit stressed getting to grips with his new phone and the demands of emailing the right people.

Next outing is Top Meadow on Weds 11th March.
Stapleford Abbotts 2nd March 2020
A much better day was in prospect for the 13 WPS making their 3rd visit to Stapleford Abbotts in a short period of time. Coventry City supporter Ash now knows how the CCFC footballers feel being forced to play at Birmingham City FC. Please give our ground back!!
​
The good weather did not mean the scores were any better as most of us scored under 30. It was the ever consistent Robbo taking 1st prize with 33pts and the £3 for nearest to pin, whilst Kevin Price took 2nd place with 32pts. Rumour is that Kevin sneaked onto the assault course (for free) next to the 18th fairway for some much needed fitness training. We expect him to be leaner, meaner and fitter this summer.
Ballards Gore 26th February 2020
Third network away day in less than a week was at Ballard Gore on a bright but windy day.
Very nice coffee and bacon rolls for breakfast was followed by some not so nice golf.

​The highest score was by Ash 30pts and 4 players, Ivan,Gordon,Spiggy were sweating on 26pts as none of them wanted to win £3 and get a cut of 1.Spiggy was the unlucky one with bb9 of 15 and Ivan was the lucky one as he got no cut and £3 for Nearest to pin.
Stapleford Abbotts 24th February 2020
A horrible, horrible, horrible day was in store for the 15 brave (or stupid) golfers that played at Stapleford Abbotts. Wet, wet, wet (not the group) and windy conditions made for difficult golf.

Winsey was the 1st to retire with NR due to his ongoing back problem, then it was my group of Skeelsey, Goosey and Fantasy man to throw in the towel at the 14th due to being drenched, clubs slipping out of the hands and more to the point, very low scores.

​The prizes were taken by the new entrants to the network away days, 1st was bandit Spiggy with 37pts and runner up was Geoff Jackson with 30pt bb9 (over Flash), Nearest to pin was Douglas Fairbanks.
Stapleford Abbotts 21st February 2020
The weather was kind to us, bright and no rain. Whilst we were having our lovely coffee and bacon rolls, Robbo was being educated on how a modern smart phone works. He will now be on WhatsApp (if he works out how to load the WhatsApp app on his Samsung S5)

On to golf and standing on the 1st tee it was surprising to see what good condition it was in.   Dry and grassy, a far cry from the Warley tees.  The Fairways were also in good condition too but as we made our way round the course there were a few areas that had excess water. Overall it was much better that Warley.

Even with pick, wipe and place everywhere,  the scores were not great but I think for most of us that was secondary. We were just happy to get out with a few mates, a bit of fresh air and a nice walk.

The winner was Dave Skinny Latte  with 34pt with a bb9 than runner up Gunga the Tourist Guide. Nearest to pin was Geoff Jackson.
May 8th Pinner Hill Trip
A bit of a favoured course, even if the journey is a little tedious. Lovely parkland set up with slopes and hills - was in pretty reasonable condition given weather etc - see photo taken below. A threatening really bad weather day,  but most of the heavy rain and storm was avoided. Course played long and greens a bit tricky, hence lower scores.

Stately clubhouse with friendly/helpful staff.  Good food, including the homemade chicken pie.   Our Captain can event vouch for their ham egg and chips - minus the eggs of course as they don't fit a hockey players diet!! Don't ask anyone why as he doesn't know!

​We welcomed John Clare to his first day this year and Dave Watt to his first ever Network day.
​
Congratulations to our winners Robbo and George, who also bagged the nearest the pin. His biggest feat of the day was of course to arrive in time to tee off with his group - even then we had to go and find him though!! 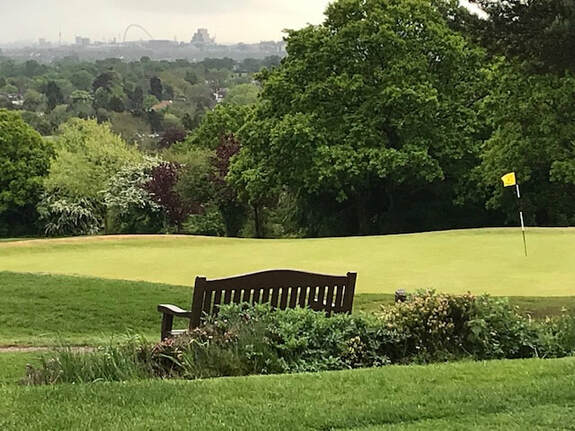 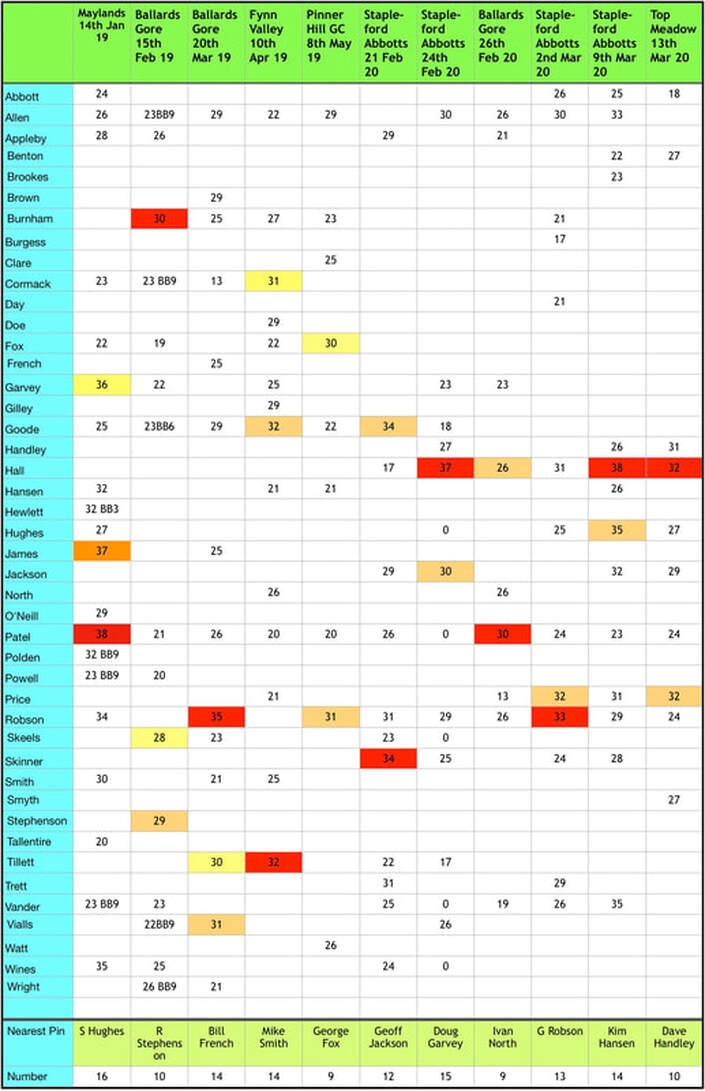 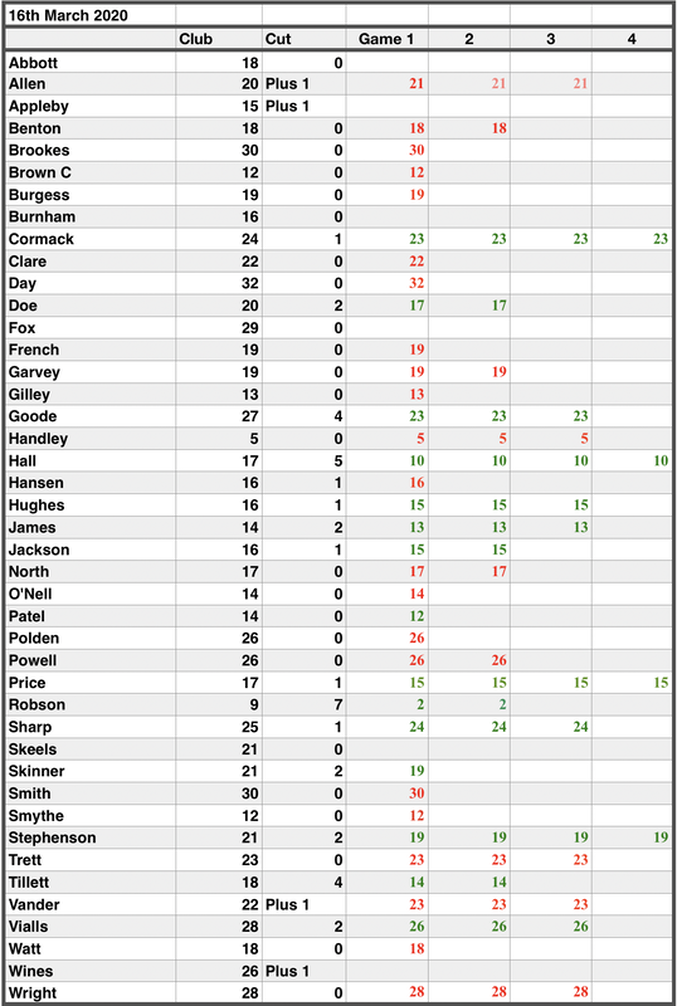