Day 4 and Final Game at Abridge GC
Friday 29th March 2019
We finished the 2018/19 season on a high, with a great day out at Abridge. Both weather and course conditions were excellent.

18 players ventured west with 3 late entries, due to injury, to Roger T, Tony Dunsdon and Joe Hardy.  Chris Vander & Steve Benton kindly stepped in, with Christine Wilkins taking up the late withdrawal of Joe -- thanks for helping to make up the numbers. Hopefully quick recoveries for the injured .

With only 8 players over 30 points the course kept its reputation for being a testing track having hosted the "Open " qualifier for 5 years.

Ray Wells won the day with 36 and Dennis Tyler & James Smyth, with 34 & 33 respectively, filled the podium.

I must just mention "The MRS " who carded 35 but was D.Qd for playing off the wrong tee boxes.

The Championship was fought out with the 3 leaders battling it out at the back of the field, but all 3 made no inroads into their previous score.

(Full table set out below).
Gordon finishing runner up on his second score of 35 to Mike's 32.
Ian Patterson also had 70 with a second score of 35, but lost out due to a "no show" for a third score with Gordon having a 31.

I would like to thank all those that supported the "Away Day" this year. 46 players took part with 10 making all 4 games and 97 rounds played.

The cost of the days have been higher than I wanted, but we have played some good "members' courses.Most players seem to be O.K. with the 4 rounds which supplement the ‘Network’ days organised by Ash.I got the impression, from those "lads" at Abridge, that 3 of the 4 courses for 2019/20 could be Abridge, Bishop's Stortford & Braintree. Cost, therefore,  for next Season's events could probably be around £40 rather than £30 pounds, but those present appeared happy with that.

Have a good Spring,  Summer and Autumn and I shall try to arrange the October & November dates early with the 2020 dates coming a bit later. 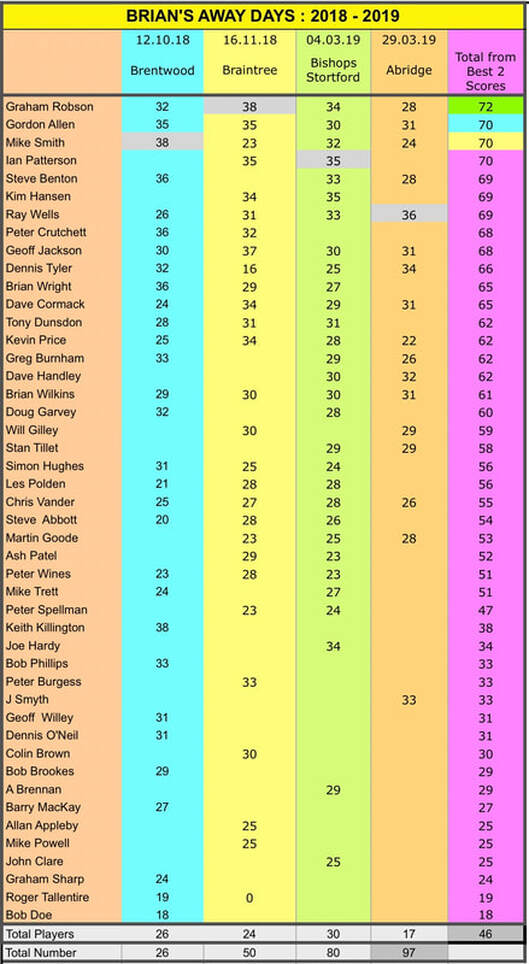 The reports on the previous three days are below
​
Report on Day Three: Bishops Stortford Golf Club
Monday 4th March 2019
With traffic problems on M25 & A414 a few of the combatants were delayed but managed to get their Bacon Roll sorted.

We soon found out that this club thinks it is a bit upmarket when the early eaters ( bacon roll ) were removed to the "Restaurant Area."

Weather forecast seemed to give us a window until about 3 o'clock , so although quite cold the competition got under way unfortunately the forecasters got it a bit wrong , when looking west , the dark clouds loomed large just after 2. The last 4/5 groups had to contend with some wet , cold and windy stuff.

This might have had some bearing , when we later found out  , that one of the later groups  had a "deja vous" moment. I think Simon may be covering this incident in one of his missives !!!!

The last event of the 2018/19 season is at  Abridge on Friday 29th March. The entry list will be on the notice board tomorrow Wednesday 6th, if it does get filled please add your name to the reserve section.

The annual competition is pretty close with Robbo leading on 72 and Gordon, Ian and Mike Smith on 70 for their 2 rounds.

​Brian
Report on Day Two : Braintree Golf Club
Friday 16th November 2018
Another good day at Braintree although the weather forecasters did get it slightly wrong. Drizzle all day was not what was expected.

Some good scores in the middle and upper 30's saw Robbo take the day with 38 points,
closely followed by Stonewall with 37.  Scores of 35 by both Gordon and new recruit Ian Patterson was decided by the back 6 rule, with Gordon finishing the podium positions.

We had an additional 10 new players to our initial number at Brentwood -- so the Annual Competition is hotting up with 40 in total.

Current leaders after 2 rounds of the 4 to count are Robbo and Gordon with 70 points, Peter Crutchett 68 and Jacko 67. (Ed note: I wouldn't want too upset our Captain - the table below only shows me at the top because of the way the filtering works!)
​

There was a full house of 30 for the day out.
Honours and prize money went to: