Message from the Captain

Many thanks to all those who supported my Guest day, especially those who brought guests and, particularly Ray and Dennis, who stepped in at very short notice to ensure we had 20 four balls.

Particular thanks to Chris and Mike for all their work and diligence, in both the lead up to the event and the checking of all the cards and producing the final results in such a speedy manner.

We raised £556 for the Brentwood Theatre, thanks in no small part to the amazingly generosity of RT.

Coffee and bacon rolls set up the 20 teams of 4, who then went out and battled it out for the golfing honours on a warm, dry day , with a sense of camaraderie and good humour - well as far as we know!

The organisation was all in place and the course was in good condition. Some of the scores (all set out below) reflected that.

The home players of Goode and Tillet had brought in the recently relocated Warley players of Garvey and Doe, who helped build the winning score of 125. Some of those who know them well enough suggested that they won’t be invited back anytime too soon!

Sir Simon’s decision to coach his team on the day, rather than play, obviously worked very well as his team of ‘guests only’ nailed 2nd place with 121 points.

And of course Robbo’s carefully selected guest team, contained just enough fire power to edge out, with a better back nine, the largely Warley based team who also had 120 points.

Prizes (as below) went out to the best Guest score (not in a winning team) and to nearest the pins.
After the golf was finished,  it was drinks on the terrace, followed by a two course lunch enjoyed  up in the Lakes View room.

Captain Steve kept the thanks and speeches short, (always welcomed) and also kept to a short and relatively safe joke.

Steve’s charity for his Captaincy is the Brentwood Theatre Trust an organisation that was very special to his wife. Two events were run on the day to help generate some much needed funds.

Firstly, entry donations to take part in the best total score from the 5 par 3 holes played that day. The pot was split 50-50 with half going to the three winners (see below) and half to the charity.

Secondly, all were invited to take part in a Table Sweepstake to guess the total points scored by all players on the day, with again the pot being split 50-50. Roger Tallentire managed to work out the math exactly, but declined to take his substantial cash prize, donating it very generously straight back to Steve’s Charity.

​So the overall outcome was a very substantial sum for Steve's charity.
Great end to a very successful and enjoyable day.

​Some rather random photos are set out below. 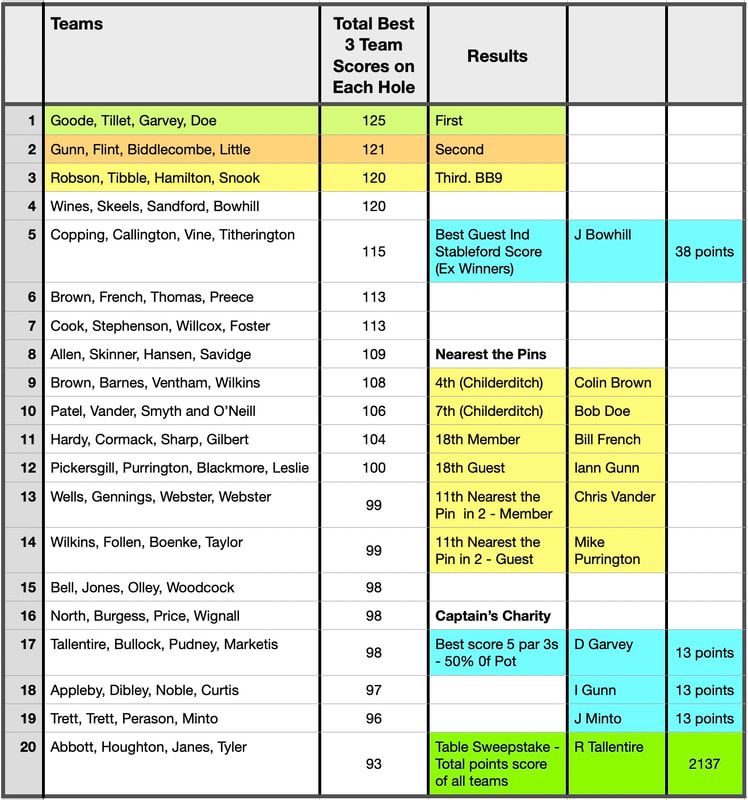