Brentwood Golf Club
Friday 20th March 2020
The list is now on the Club Notice Board for you to sign up.

Details to follow
Abridge GC
Friday 1st November 2019
Arrived at Abridge to a bit of drizzle, but soon the bacon rolls were rolling out and soon after, the round started in overcast conditions

We soon found out there wouldn't be any run on the ball as it plugged on the first fairway. Greens were in excellent condition, but the rest of the course was very wet

One of our number had to be 're-shod' on his way round as his boot collapsed in the sticky conditions!

A few will allow this round to be discarded in the 4 game competition (only 2 scores to count). With points of 33, 34 & 35 however there was some good golf played by some.

Ray won again on his favourite track, with Spiggy in second place, just one behind.
Chris V. took the other podium spot, as one of the 33 pointers , with a Back 9 of 19 points. Doug and Robbo were the others tied with him on 18 & 17 points Back 9 respectively.

The full list of scores is on the web site, kindly organised by Gordon.

Our next meet up is at Braintree on Wednesday 27th November (16 entries on the board as of today).

​NB See result table below
Braintree GC
Wednesday 27th November 2019
The day was looking a bit bleak on the forecast, but I think most of us had 13/14 holes without the drizzle.  A few road works on the way still had all 19 of us ready to tee off  on time, in the drizzle.  In the early holes the water was still laying on the fairways, with some greens having lying water puddles on them

The lead group had Steve A and Simon, chuntering away about the Club situation, whilst Bob could have a quiet stroll. Mike S decided to call it a day after 9 holes, not his boots this time, I gather,  after he was re-shod at Abridge.

The players in the latter groups probably had the worst of the weather, but this did not affect their performances. The top 3 scores came from the last group which nearly had to use their night goggles to finish around 3.30pm.

Captain Kim was in top podium position with 37 points, whilst Gordon & Dave H. were home in 36 & 34 respectively.

Full scores are in the table, but current leaders in the clubhouse,  after their 2 qualifying games are :-

Enjoy the rest of this year (interesting times !!!!)  and have a good end of year celebration. 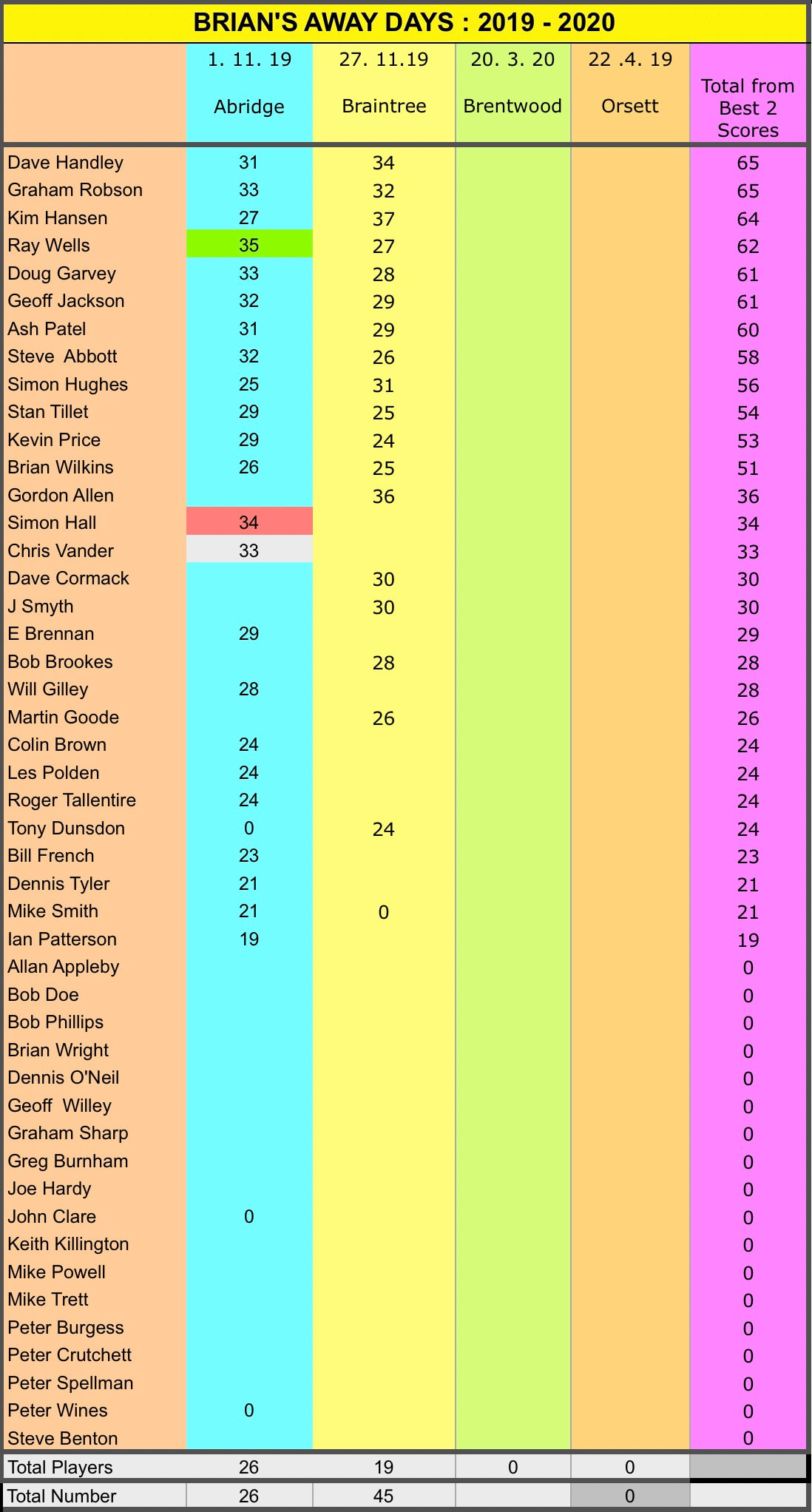