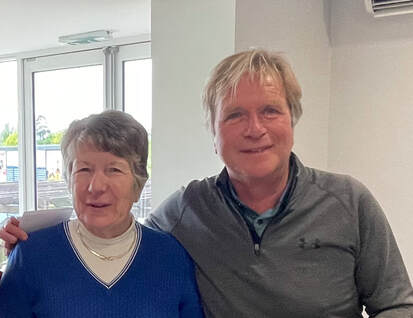 Never an easy event to get organised. And no different for the 1st one this year.  A bit like asking a lady for a dance in the ‘old days’ - the men are bit backward about coming forward to play and then when they step up - the lady says ‘ sorry I’m taken’ ! We used to call it being a bit shy.

But eventually enough were signed up for a party and partners were matched up - we ended up with 23 pairs down to play the usual Chapman rules game.

The next problem was getting the handicaps sorted.  Recounts were demanded and midnight oil was burned with an abacus getting them fit for purpose in a fun event! Shout out to Chris for patience. 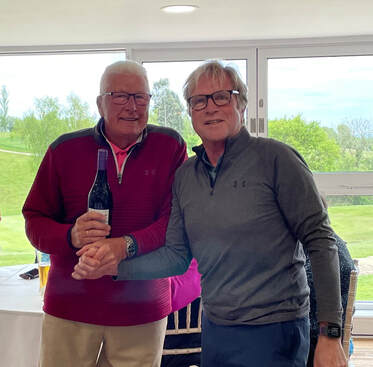 Thanks Chris
Last year we said that everyone could stay in golf gear for lunch, but at that point we hadn’t seen Chris’s shirt.  After a long committee meeting it was again agreed that casual would be Ok, as long as Chris didn’t wear that shirt.  Luckily, the weather was on the cold side and Chris kept his sweatshirt on, although there was a bright pink glow emanating from his sweatshirt gaps!

Never completely right on the day, a lady drop out resulted in a late male signee to the event being stood up.  Never one to be described as a wallflower Tim was happy to be part of a 3some and used the opportunity to get another good round in to further reduce his ‘generous’ handicap (and he was well above the the bottom scores on his own).

As we had an odd number of pairs Captain Dave and Lady Captain Carol set off alone.  We don’t know what they discussed in all that exclusive 1-1 time, but we certainly know what the outcome was!

Most of us went out with slightly early morning droopy eyes and a bit of a tired step to start the day.  Roger on the other hand went out with bright eyes and a light step! I’m going no further, but Jan said he was very happy. I must admit I forgot to bring along the Angle-Saxon Dictionary to hand to Pippa before they went out to play and wondered how she managed with the new language of golf that Roger has developed as in ‘Roge(t)s Thesaurus’. Anyway the feed back was good as it seems he has been getting more acquainted with the medical dictionary recently and can now talk about injuries and ailments in great detail and at great length !
NB Chairman ‘O Steve’ only admitted to one uck in the whole round so the woke agenda (Sir Simon) is beginning to win through!

But while that was going on poor Karen Powell, a lady used to having to contend with partner John’s large handicap, had to spend the morning caring for Bill who had a few mishaps, Stopping his water bound trolley was the least of it I hear!  But at least once they got in Sarah (Club) could take over having to manage his feeding and drinking carefully at the bar and the table. Someone said that he was practising his ‘Vice’ role at the bar, but I want sure if that was related to drinking or golf?

I’m sure its quite normal - man or woman doesn’t know their playing partner so before they go out they ask around, ‘what’s he-she like?’.  So, not unnaturally Sue asked me about Steve Bell.  I said the obvious - reasonably good golfer, hits it a long way, but not always where he wants to be, likes to be called Belly - yes Belly.  Not sure why… Loves Cricket - Ah, found some common grounds she says. Happy.  Plays. That evening  - good time with Belly? Yes lovely man (??) she says. Recites a complete profile - family, jobs, charitable work, interests etc etc polite snooze….. I’ve been playing with him for a couple of years now  - I knew he was an accountant and liked cricket.  We should staff our secret service with women only.

Whilst its unusual given the very high scores I didn’t hear much about the golf itself. But Pam Oldham and I had very good game together (only just missing out) . Whilst I think I can say that my chip in on the 5th was perhaps the one shot we all remembered, it was Pam’s golf that helped the score build. We had a lovely time playing with Jan Tallentire and Dennis, although there were one or two of his shots’ that were instantly forgettable - ‘dogs breakfast’ was mentioned, although I don’t think that’s the reason he left before dinner - I think it was because his dog needed its late breakfast.

Anyway, everyone came in a little chilled as the weather turned on us a bit, but the chatty background noise suggested that people were (mostly) happy with their day.

Dave and Chris started to record scores, but had to send out for more pencil lead and paper with bigger boxes, as the numbers they were having to write down were very large and outside their normal numerical experience.

We decided we were all hungry and moved on to be fed. It has to be said that deciding the national boarders of Hungary was probably a little easier than sorting out the food menu choices of our 40 or so players, but Carol and Dave got there eventually.  Dave thanked Carol in the usual way. 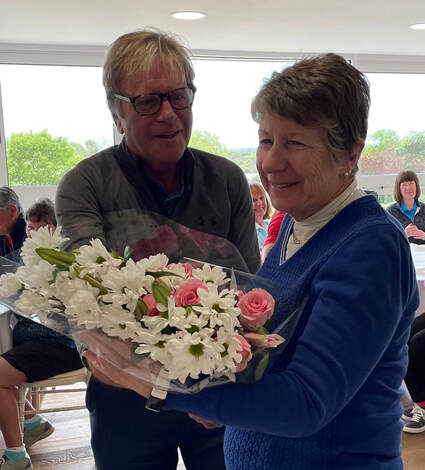 We said one flower for every 2 points didn't we Carol?
No surveys were taken, but the general impression was that both the Caesar Salad and the Burger Meals were good and much welcomed. 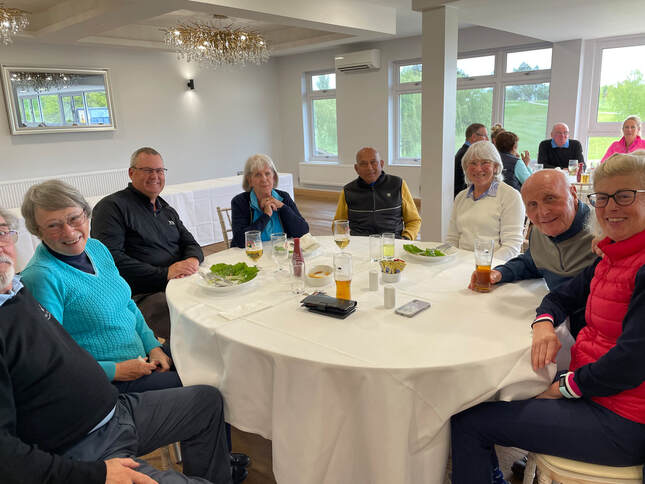 Sorry Brian! But its your best side! 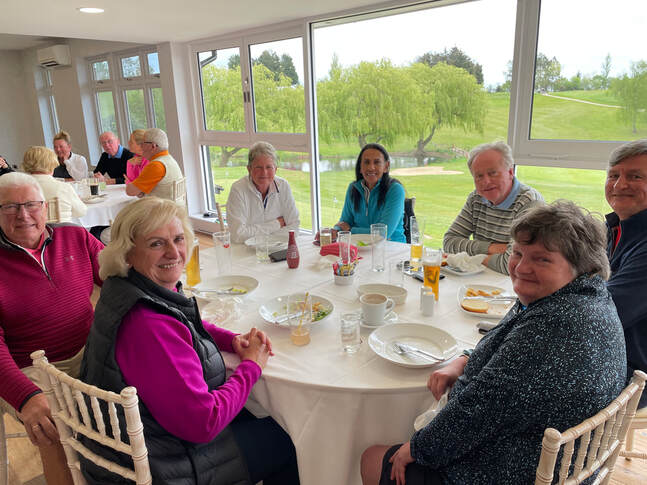 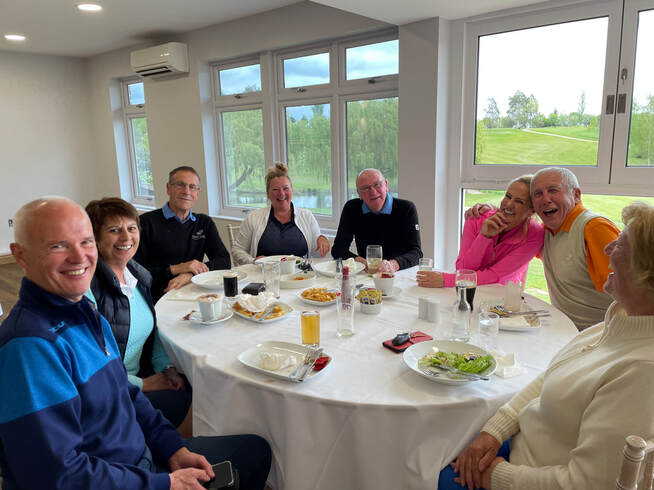 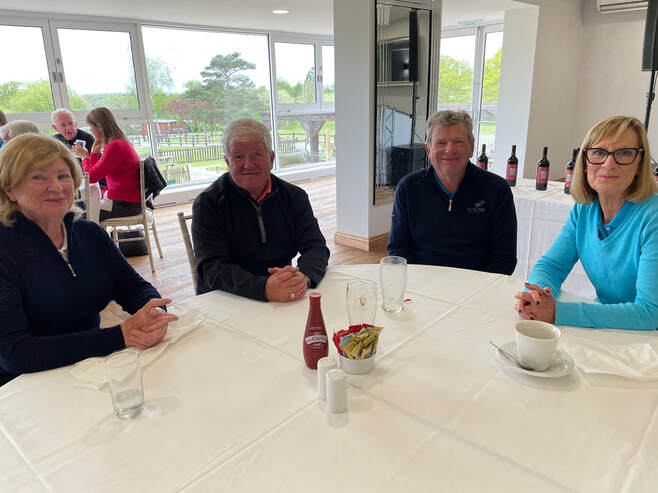 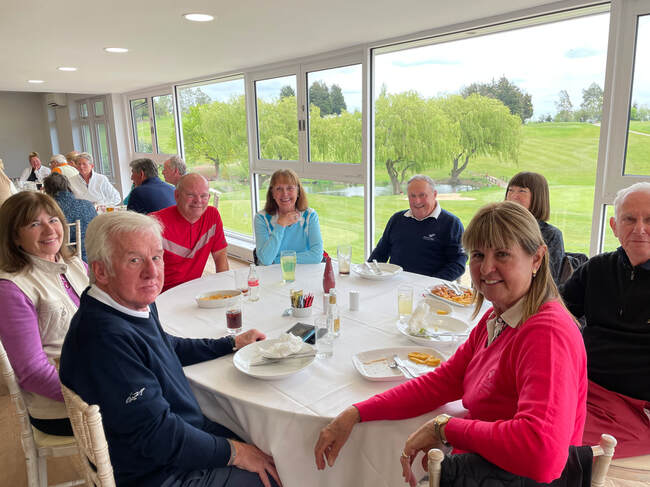 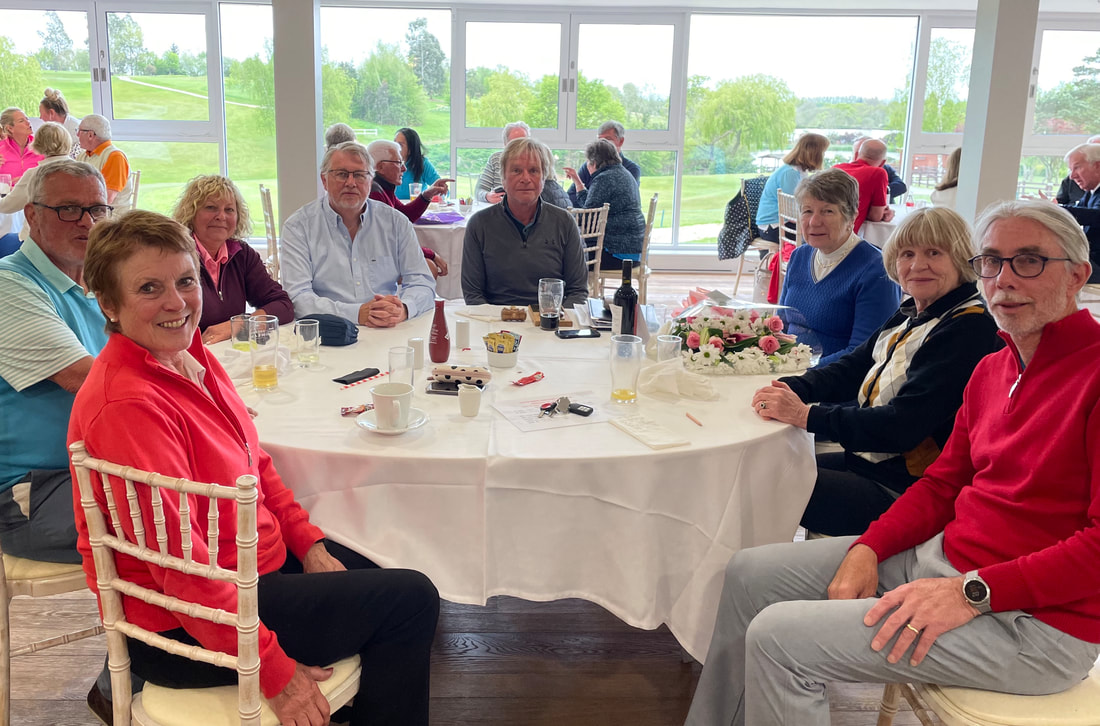 A place was laid for Dennis with a Dog Bowl!
As the meal came to a close Dave, Pam and Chris shared the days results. The full table of results is below.

(Those Cormacks again !  They seem to slip under the radar - that’s some kind of win for one or both of them in the last 3 Ladies-Seniors days!)

Topping the day was Captain Dave Skinner and Lady Captain Carol Mumford with a remarkable 51 points.

(Yes, yes , yes…..on the course all on their own with lots of time to spare - we heard all the theories ……). To my knowledge (which isn’t much) I don’t think the Captain’s have won one of these so that might be a 1st ……..but why hasn’t Dave suffered the golf curse yet as a Captain. There has to be a reason for it…. Mary????   The table below suggests that Steve might still struggling with the curse - and a strange place for Delray to be!

A very well done to all the winners and particularly Dave and Carol in setting a new trend. 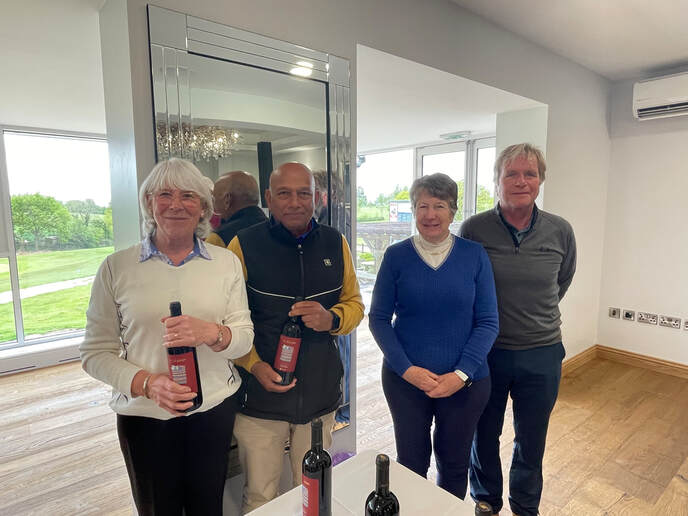 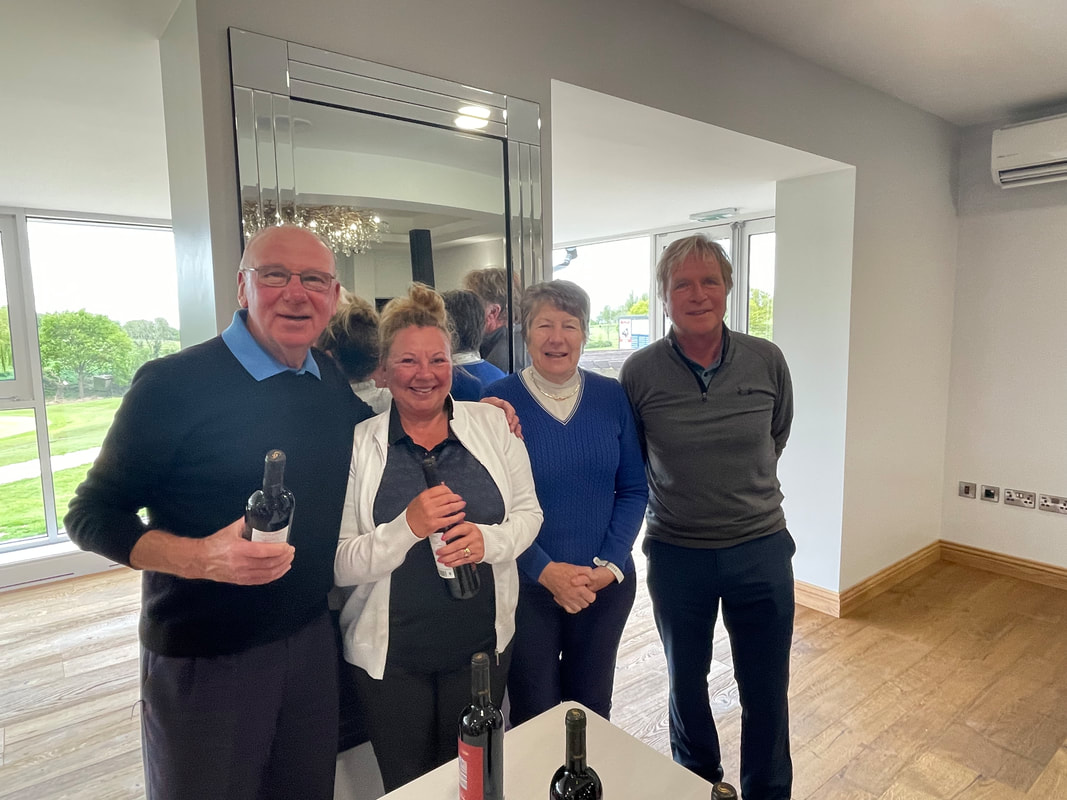 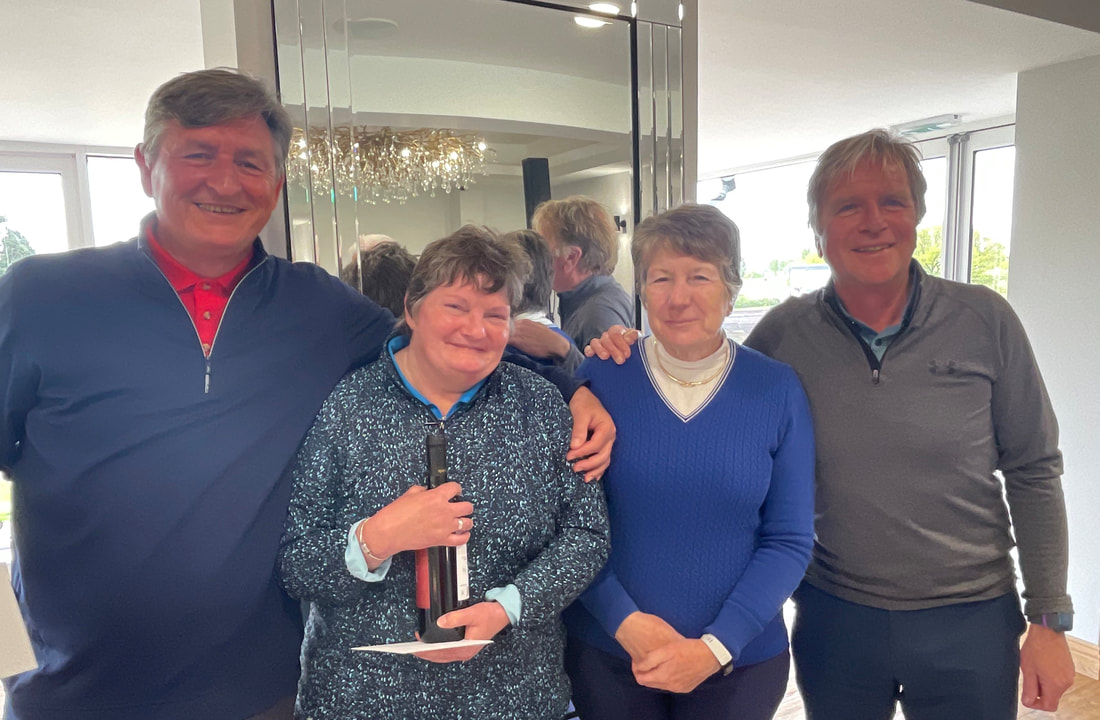 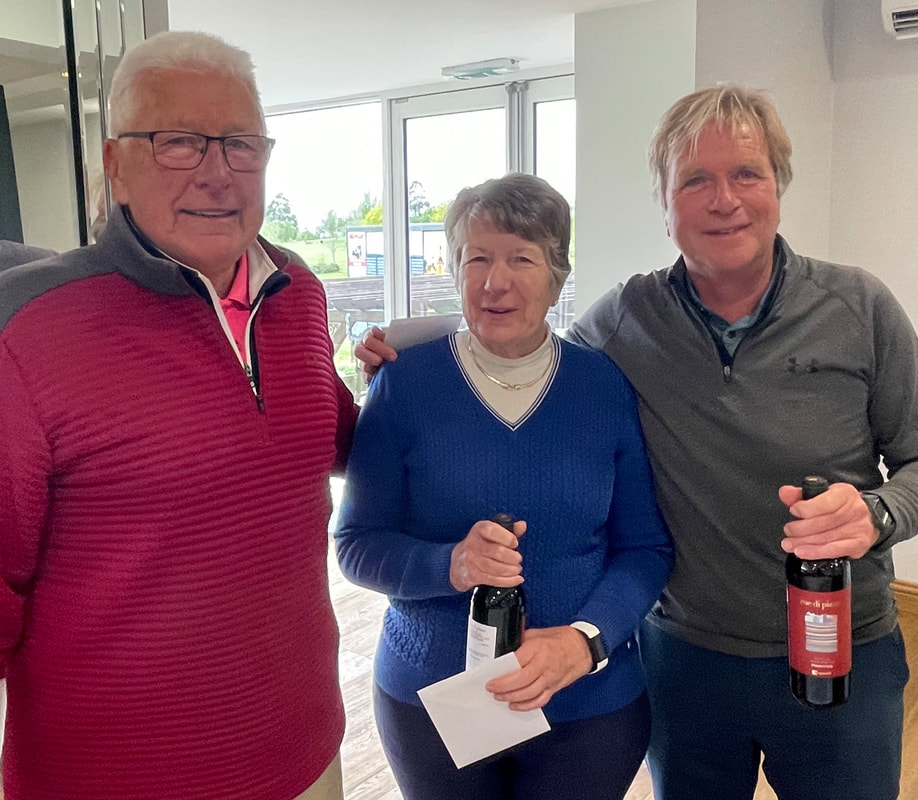 1st overall Captain Dave Skinner and Lady Captain Carol Mumford
So, a very lovely day of golf and good company enjoyed by all - our collective thanks to Dave and Carol for all the organising and also for the backroom work by Chris in ensuring it was set up to work on the day.


Gordon (all stories have been fact checked!) ​
Results Table 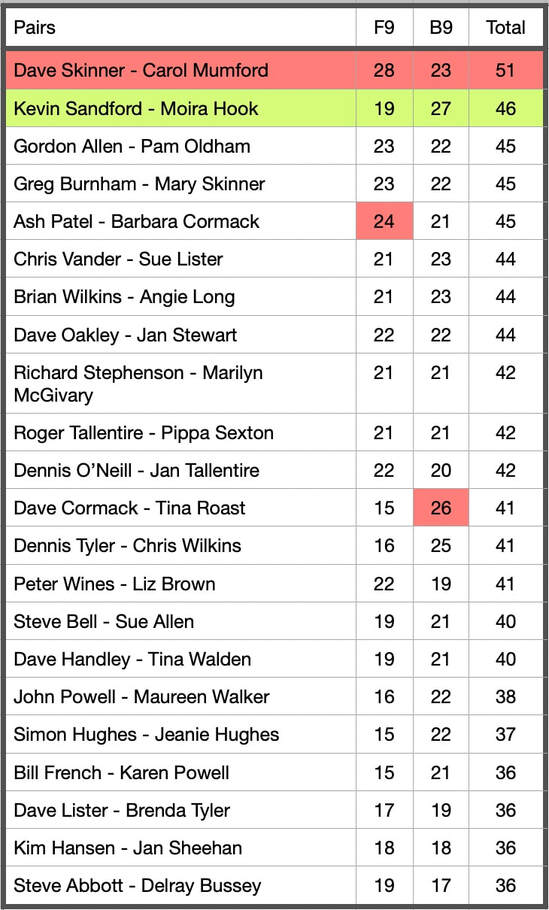