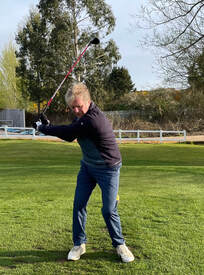 ​The big drive-in moment: personal fortunes to be decided by Captain Dave's Driver (3 Wood) prowess
Postponed from its usual spot earlier in the year, it made a change for the Drive-In and Jack Wisbey Cup to be played in more spring like weather, which although a bit chilly to start with, turned out very pleasant indeed.
Well, a total 76 yards and only just in bounds Dave! But it earned Adrian Webster £255 of the total £515 collected on the drive-in board by ex Capt Steve. Which meant a min of £260 for Dave's charity. I say £260, as Steve said he was going to point out certain traditions in the seniors about drive-in winnings!
Seniors Captain's Lunch and The Jack Wisbey Cup - Results 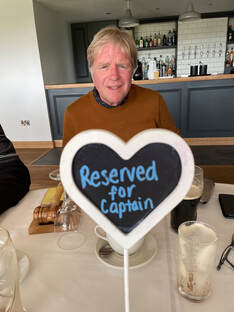 Reserved parking, reserved dining, reserved Dave ? - not likely!
Numbers grew for the lunch as some non golfers on the day joined us for the Captain's celebration day. An excellent two course meal served very efficiently and taken with differing amounts of alcohol was very well received.

Captain Dave treated us to a (relatively) short and humourous speech, focusing on his introduction to golf, principally around the flexibility of many ladies in the way he dressed for golf (?), as compared to the uniform loving fantasies of the 'Sarge' (Roger).

He kept up the theme with a charming story about his altruistic side and Robbo's trousers! I won't go there!

The traditional joke contained only one 'old Anglo-Saxon' and no sexual references - I sense a 'new sensitive man'  at the helm!  Although I know from past history that Dave struggles with Woke as in 'He Woke late' !

There was more, but most of it was more serious so I won't bore you with it.
Recognising Colleagues' Contributions
One last and important role for Captain Dave in that part of the gathering was to record our collective thanks to Steve Abbott as Seniors Ex Captain for his excellent leadership and stamina over an extended period in the previous two years.  A memento and gift was presented. 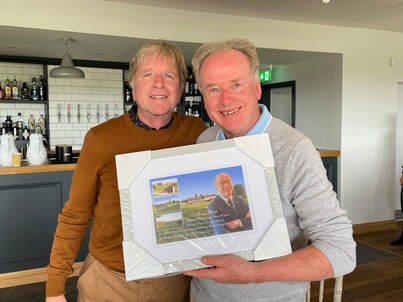 Thanks for all your work Steve
It was next the turn of Steve Abbott, in his new role as our 1st Seniors Chairman, to remind us about the history and contributions of a much valued senior colleague; Mike Trett or Tretty or Headmaster, as most referred to him. It was great that Mike was able to get a little time away from his full-time care of his wife to share our meal and a little social time.  Mike undertook a number of roles in his time with us and always did so with a thoughtful approach and fairness in any decisions. He also played some pretty good golf, despite having the ex-hockey players back swing!  He did also carry on as a hockey ref for many years and wasn't above giving out a red card on the course for excessive use of bad language - Roger? (A bit of fantasy there Sir Simon). It was lovely to be able to present Mike with a little memento of his time with us and a gift.
Results
A few late drop outs and a few draw changes saw 32 seniors start out for the day's big 18  hole competition. Those on the 1st tee trying hard to better Dave's drive -in shot (although we gather he went on to get a 5 for 2!).  Those on the 10th tee tring hard to remember to mark the card on the right hole ( I failed !).

The winner of the JW Cup playing off 36 was Tim Wayman with an excellent 43 points. A cut coming Tim, which we know you will welcome. Great result - well done.

And in 2nd place overall playing off 21 with 42 points, was someone who continues to defy the usual performance decline of new Captains; by actually continuing to play excellent golf despite all the worries and concerns of Captaincy! Only joking Dave; an excellent result on top of all the responsibilities of the day.

Tim and Dave also of course won the Captain's' 'on the day prizes' for the over 21 HC category. 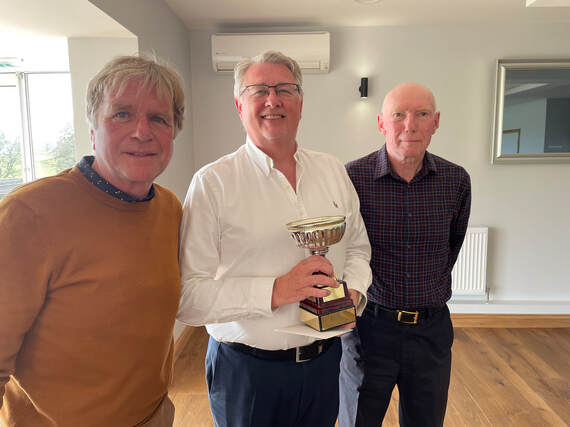 Well done Tim
The winners in the 21 and under HC category were Graham (Robbo) Robson playing off 11 with a very excellent 41 ( 9 pars on the back nine!) and new to everything WP Seniors, Doug Barrett off 21 with 39 points. Well done to those guys.

​A mention for Graham Sharp who despite getting 40 points and 4th overall didn't collect a prize ! 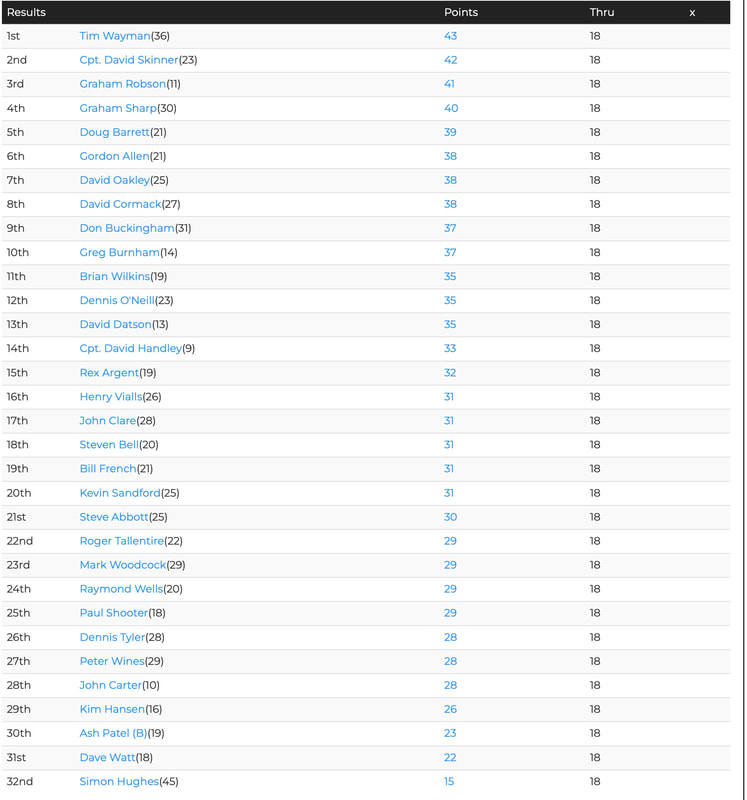 Captain's Nine Hole Cup
A small group (Messrs John Foreman, Colin Anthony, Dennis Headon, Brian Wright, Peter Hill and Brian Elsworth) of the Seniors nine-holers contested the 9 Hole Cup alongside the 18 hole competition.  Coming out on top was John Foreman with 14 points. It was good to see that Bob Butler joined for lunch. 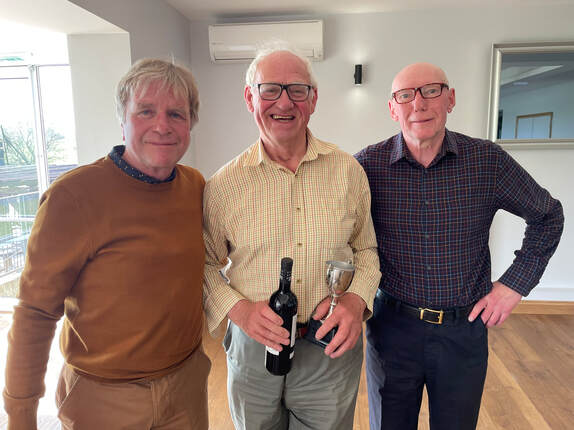 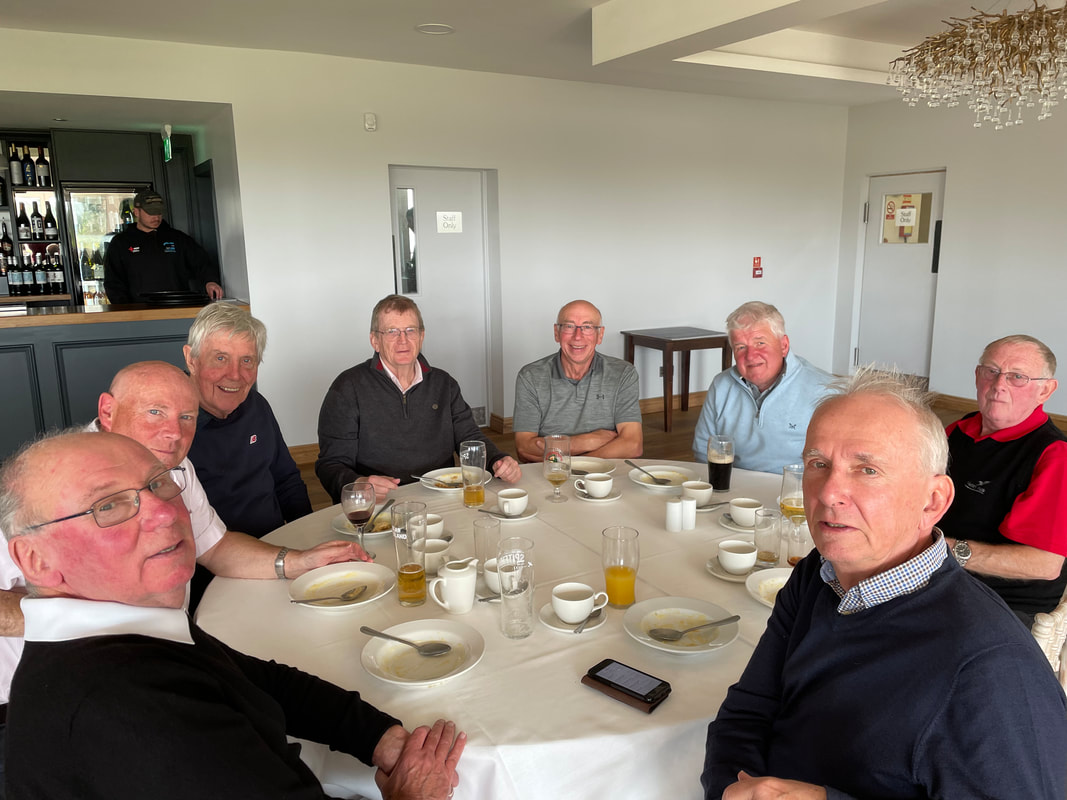 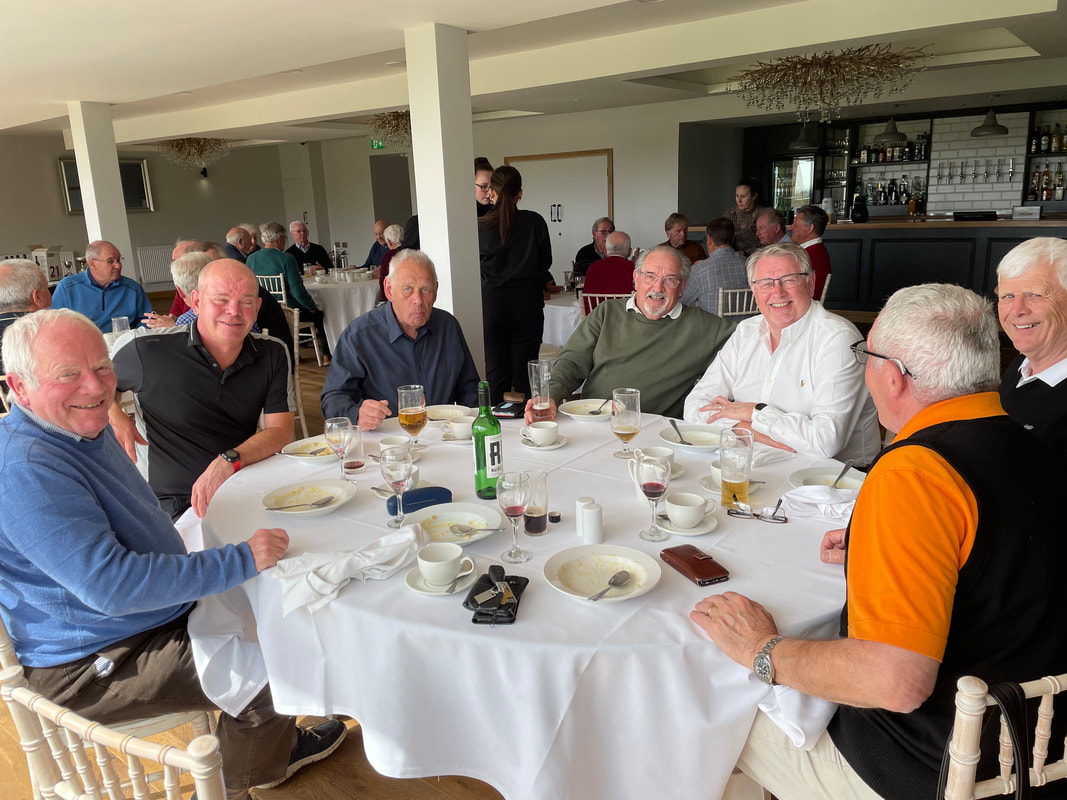 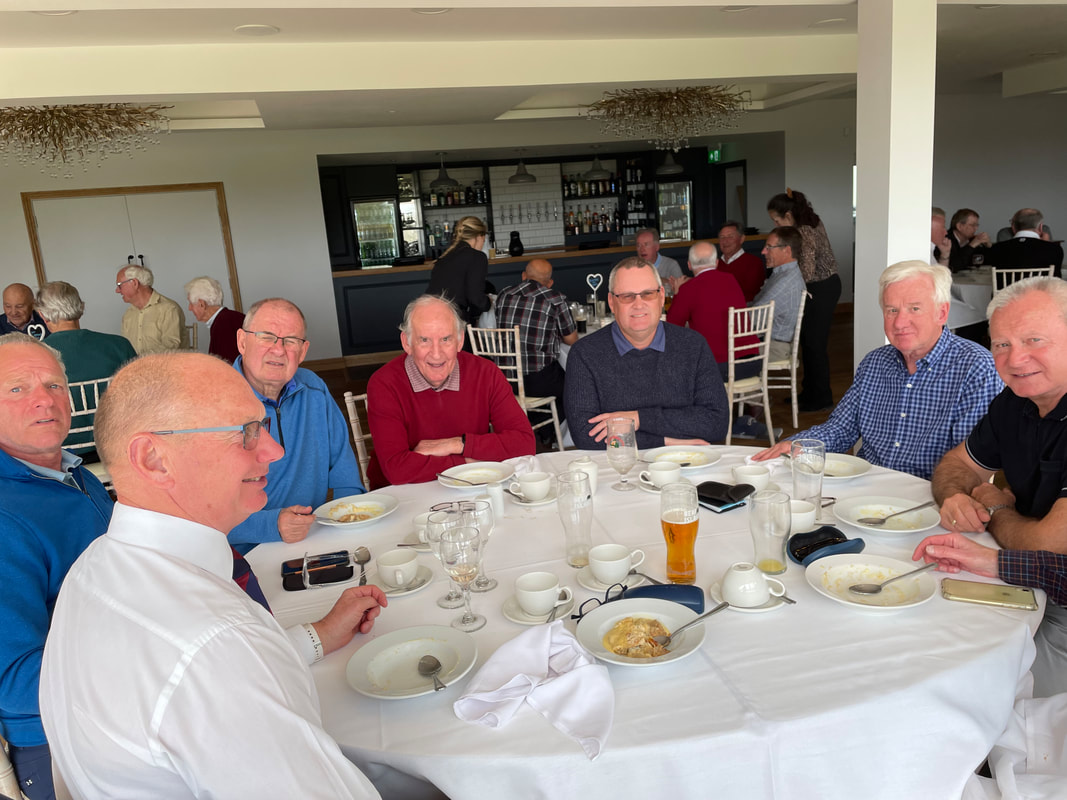 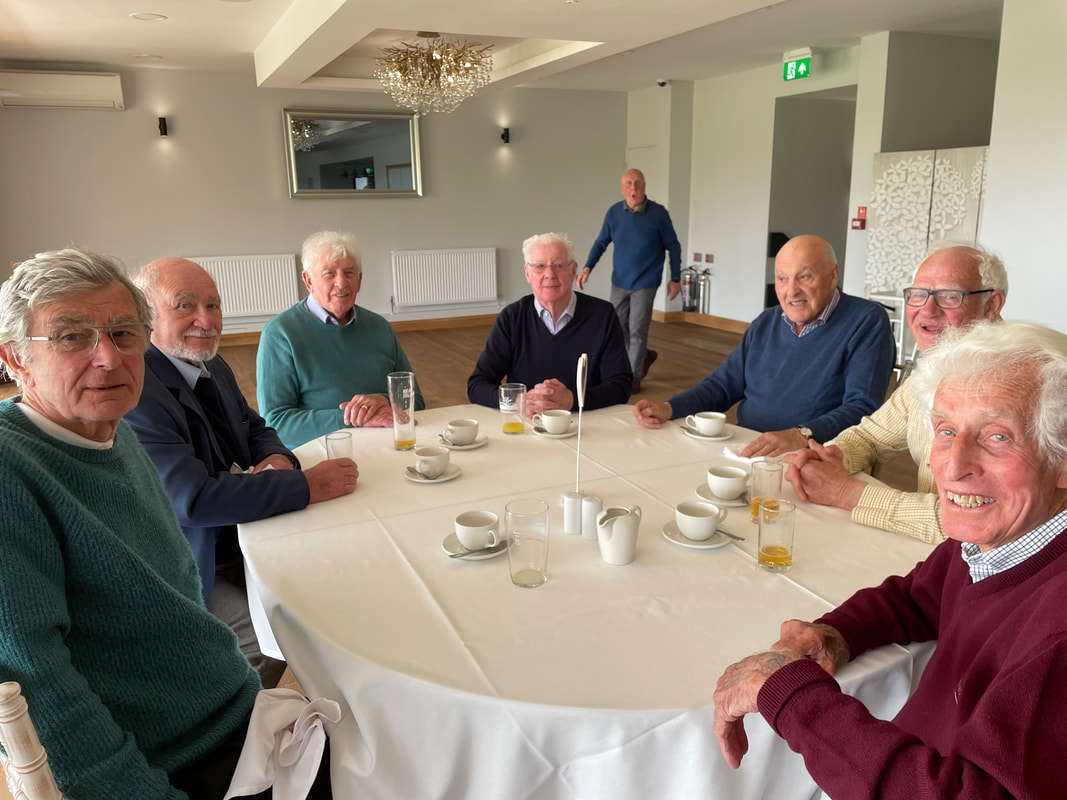 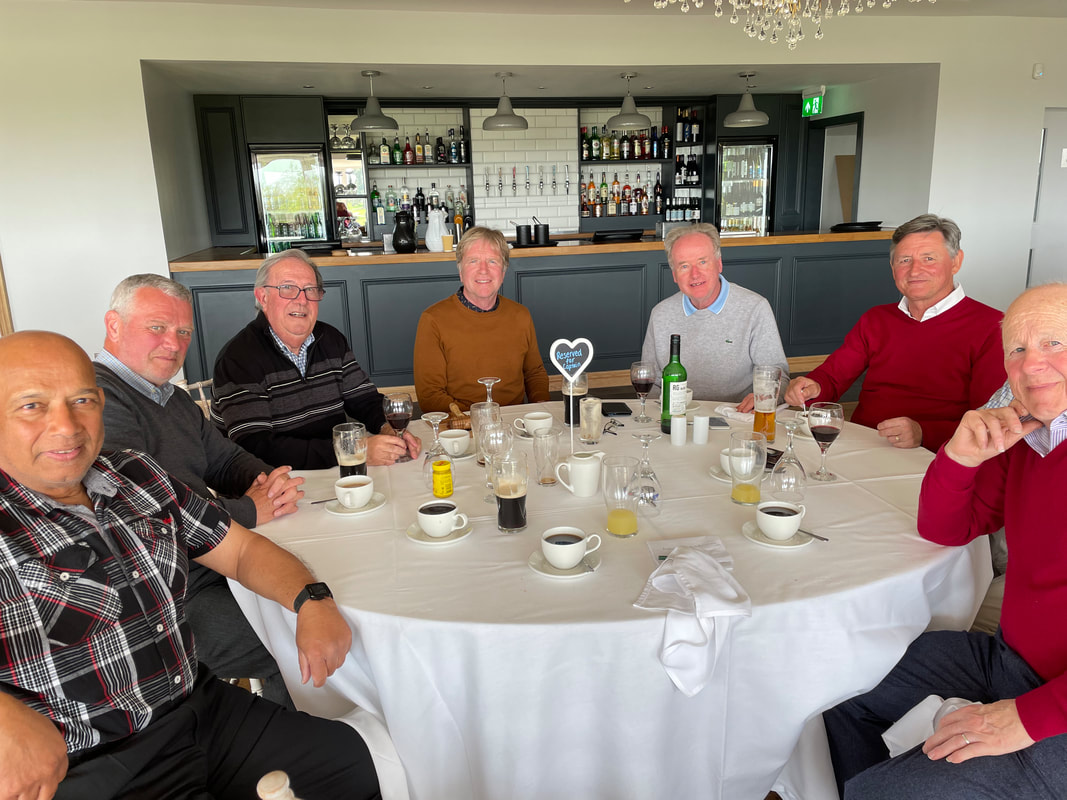 Very generously a collective total of £30 was donated by the winners to Dave's charity.