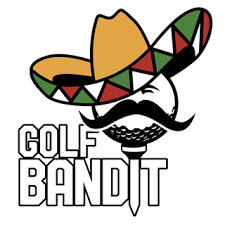 It’s going to be a pretty close race this year for the Sombrero hat awarded for bandit of the year as Geoff Brown’s front running position is now under severe threat from Dave Skeeleton, as he landed two vouchers in the latest set of results. Firstly, was a half share of the Oscar Bate Trophy which he shared with a bandit of yesteryear, Flash Gordon, and two weeks later, when he landed the David Greene Trophy to mount a challenge to GOY leader, Lord Burgess.

In between, old stager Rex Argent landed the Summer Wine Cup with a gross 80 – the true mark of a golfer as he undercut his age with this score.
Orson Wells and Mr What scored valiant second places in the two GOY competitions and all deserve big congratulations as scoring has been outstanding.

In fact, 49 points betterball in the Oscar Bate with 36 points last place, meant I thought it had been played off red tees.
In the meantime, Jeanie and I lost to Liz and Ed Brown in the Barham Mixed and afterwards Liz said how pleased she was that husband Geoff had joined the seniors. I asked why and she said because at last we had got his handicap cut so now she may win when they are on holiday. I reminded her she had won a prize as Satnav navigator of the year in 2018 when she punched an H into her machine and went to Havehill rather than Hintlesham, only to hear Mrs Wilkins recently got B for Ballards Gore muddled up with B for Boyce Hill and nearly missed her tee time. Compasses and maps have been added to the ladies prize list.
Meantime a few of us have had that letter from Ash asking if we want M&S vouchers or Pro Shop vouchers. I had won the winter doubles and would have preferred a cup and a piece of cake, but picked my voucher and asked for a signed picture of my partner Doug (he has won it for the last three years you know – oh you did know). Luckily I got one sent by his wife – attached – apparently he talks more than listens at home too. 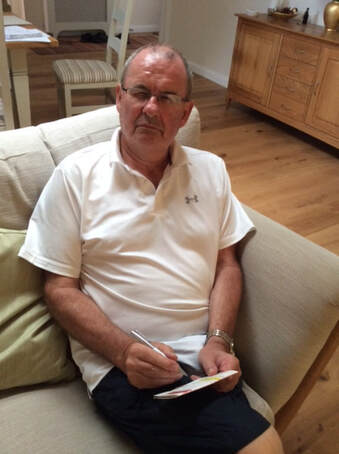 Then you probably noticed Shooter P had a DQ by his name after getting 39 points in the DG Trophy – forgot to sign his card. As a press reporter I try to contact him for a quote and managed to get a snap through his window of him practicing signing his card (attached). And the quote – I am suitably miffed – and how many Os in Shooter. I asked if he would make amends in the next GOY which is a medal but the hard man from Derby replied – I don’t like medals.
Speaking of partner Doug he was recently pulled up for having 15 clubs in his bag but on investigation it was found to be 13 clubs and two half clubs as he had broken a 7 iron in a fit of peek. Vice Skip Steve was well impressed so Doug now leads the running to be next year’s vice captain.
As it is the end of July it is interim prize time and the money goes to our famous golfer B Wright (£15) with runners up to broken string 7 putt Yo Yo O’Neill (£10) and broken club Garvey (£5). In fact, Dennis has been very engaged in the transfer market this year to good effect and has recently transferred out GOY Burgess, and I quote, ‘because he was rude to him’ – something about hairspray................
And Finally a Plug for the Ladies Section Summer Fayre.

It is on August 14th and apart from a number of stalls and games they will be serving Tea and coffee and Cake by the Lake
It is a swindle day so I suggest we adjourn to the wedding pier for drinks and to look for some of those balls we have lost in there.