Result for Fri 7th May 2021
Good conditions, although a bit windy today. Course now beginning to look much more like Warley at its best. Robbo was absent for the day, so one less of the likely top placings to worry about for the field. Ian was left waiting on the tee - he has been last out every time he said! But Ray was even further behind him having taken up the spare space with the highly intellectual BSc team, which followed the Swindlers.

For the Ed it was a day of highs and lows, not mine, but those around me. Ash put in a very impressive winning performance on a cut HC, with a score of 39. His 3 for 4 on the 17 out of the trees on his drive was a highlight and helped his team pull back to just one behind in the match. He then (rather annoyingly) turned it into a draw with a 3 on the 18th! At the other end there was Henry.... 20.....what can I say? He certainly managed his (golf) frustration well on the outside!

​In second with a very good 37 points was John Clare and in 3rd was Kim with a solid 35 (he said he was saving himself a bit as he apparently had to play some game called hockey in the afternoon - I thought that was something to do with darts?).

Remember to check your Course Handicaps when you play the Swindle guys as it could change after every competition. 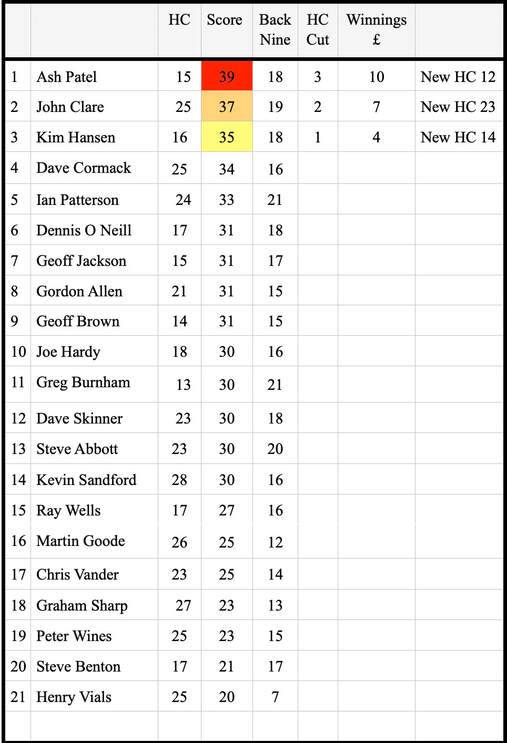 Result for Weds 5th May 2021
On a bright but chilly morning the fourth Swindle of the year produced the fourth different winner. Eagle eyed Ash managed to spot that Robbo had incorrectly given Gunga a course handicap of 30 instead of 29, but that didn't stop Martin taking top spot on the day with 37 points. He was closely followed by Geoff (who until this week had become the invisible man) Brown who took prize money for the second time in three days, following his 36 points and, of course, also received his second cut.  Also making the podium in bronze medal position was Joe Hardy who played only the second blob free round of the day and came in with a very good 35 points.
Well done to Martin, Geoff and Joe.  It is good to note that the prize money and cuts are being spread around and hopefully we will see a few names taking the money in the coming weeks. 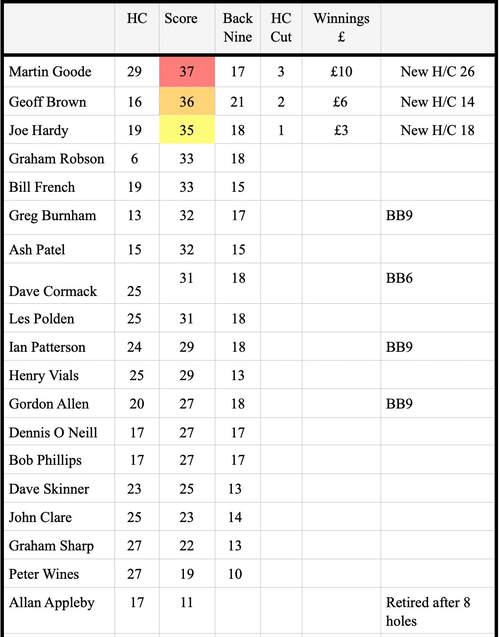 Result for Mon 3rd May 2021
A busy course, with changeable weather, so not perfect for golf. But good scores took the top positions. Very well done to Greg in 1st and Geoff Brown in 2nd.

Steve Abbott and Geoff Jackson took the opportunity to get in early and play their singles match within the swindle. (we are encouraging Swindlers to do that in their singles and doubles matches this year). The result was a 5-4 win to Geoff; so well done to him and hard luck to our Captain Steve. I hope someone brought him a drink!

Although only 11 played in the swindle, a further 4 'swindlers' played in the Mid Week Club Medal Comp playing off the whites. As we had a spare space and to be accommodating we placed Ash's son in law, Chris,  in a swindle slot as part of those playing the medal. We rather hoped that the guys would share a few Ash stories or  'truths' with Chris, for him to take home and share more widely!  A very small entry for the medal, but your Ed. did quite well!

Robbo has got well into his tables now and apart from the below, you can now see the 1st Main Swindle Table sheet here: Swindle 2021: Main Table  I won't mention the name of the person who heads the table, but he has had the modesty of not highlighting it!  Yet!
​ 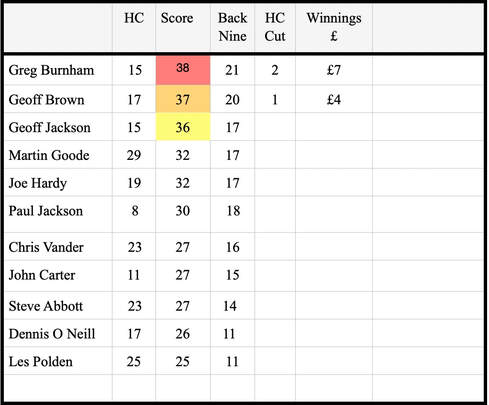 Result for Fri 23rd April 2021
​20 Swindlers turned out on Robbo’s 2nd day in control on another bright, sunny, but still chilled day.  It’s difficult for me to write this of course, but it was a sparkling day for Dennis with a very good winning score of 40 points (BB9) and some missed birdie chances.  I know this because unfortunately I had to watch him steam ahead of me in the days points tally.  (Still 4-3 up though). An unlucky Ash grabbed 2nd place, also with 40 points, having got 22 points on the harder front nine.  Lots of competition for 3rd place with 5 players on 35 points, but with the recent high scoring winner, Headmaster Trett, taking it with a BB6 of 15 over Greg.  ​

​NB Remember no swindles next week - 2 comps and an Ash away day. 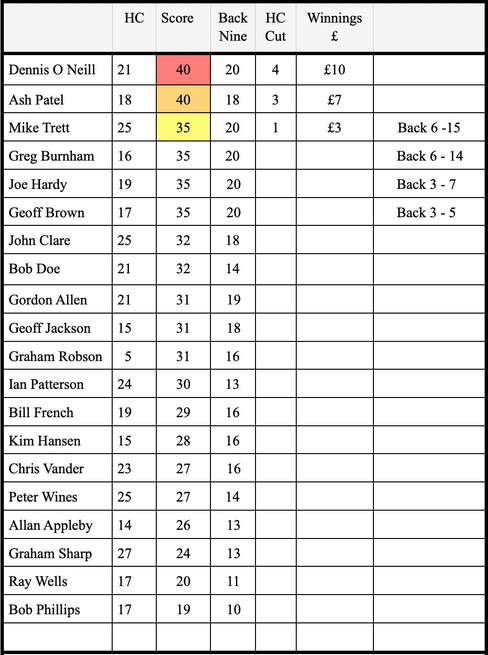 The 1st formal Swindle of the year on a day of mixed warm and a chilly weather on an improving course, with our new Top Swindle man in place and a good field of players.  The old guard did their (very) best to unseat the younger favourite, but Winsey's 38 was not quite good enough to prevent Robbo 39 (couldn't resist winning on his big day) from snatching the top spot.  Good scores guys. Our Superhero Senior Ash was clearly suffering from success fatigue today! And we welcomed Mike to his first formal Swindle and his 1st pound in the pot.
Sorry to hear Paul was unwell whilst playing and we all, of course, hope he is OK. 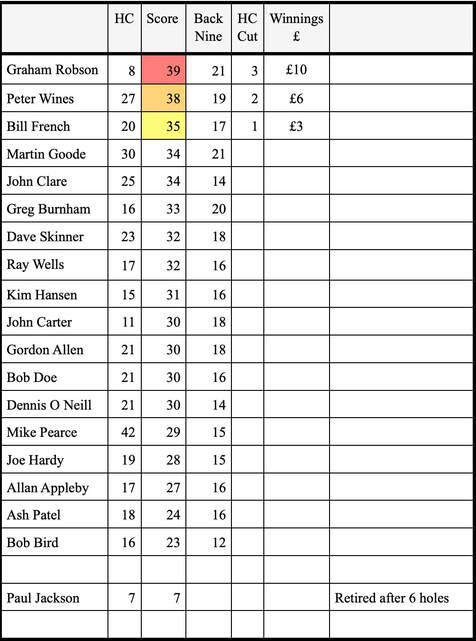