A biased Blue Team Commentary on the Captains’ Putter ​(as the winners they get the bragging rights)
The 2 teams arrived keen to battle in their Blues and Reds - or pinks, or oranges, or browns - it wasn’t a good sign for the Captain - a team that couldn’t quite get it right on the day!

We can’t comment on how the other individual matches went, but it seems fitting in this report to cover the main event match - where the Captain and Vice Captain get to fall out briefly in a competitive spirit - would have been a good watch. It proved highly competitive on the banter - if not much more!!

Steve had picked a day with a rather misty start for the Captains’ Putter.  So Steve , Kim, Colin and Gordon set off in murky conditions.  So murky in fact that it took some while to find Steve’s first ball of the day in the ditch. A dropped ball, but not much use for the Captains Actual Putter first off.  A par win for the Blue team on the 1st got us started.  (1 - 0 to Blues)

But all was made good on the 2nd with a long putt sunk by Steve to make the match even. (1-1).A medley of poor tee shots on the par 3  3rd resulted in a half.

Another good par on the 4th for the Blue team brought on early mutterings about a certain persons handicap - completely unfounded of course. (2-1 to Blues)

All was going nicely on the 5th when Kim produced a new shot form, called the ‘Squirrel Shot’ - poor Squirrel - he though he was just off to the woods and didn’t expect to be hit by a 3 wood on the way. Anyway a half transpired.

A good start to the 6th, but an iron shanked right into rough largely removed any threat from G. A similar outcome was expected from Ks 2nd shot into the woods, but somehow the ball ended up in the middle just waiting to be hit onto the green - probably something to do with squirrels in the woods I suspect! But never mind C was already on the green for 2.  Another half.

A good par for the Blues on the 7th, but not before we had a close inspection of Paul Jackson’s ball on the green before we putted! It had the look of a winning ball - ask Robbo! (3-1 Blues)

Steve got the Reds a win on the 8th (4 net 3) , but not before G had mistakenly thought his partner C had a 3 in the bag already and picked up with a putt left!  (3-2). C obliged by missing his putt for 3! The blue team's conversation was a bit muted then for a while!

But starting the 9th all avenues were open and the Blues took the hole with a very long par putt by C.  Just for practice G also sunk his long putt for a 4 net 3!  (4-2 Blues)

So the Blues were 4-2 up starting the next 9. with their spirits up - the Reds meanwhile were rather looking for some spirits to put down!  More mutterings about handicaps and lucky bounces (you've heard them all), but the Red team were also having a moan!

An extremely long par putt by C gave the blues another win on the 10th (5-2).  Another par by each team quickly followed on the 11th for a half (although it transpired that the blue team had again picked up too early and missed another possible win putt - so in the ‘pick up balls early match' it was 1-1), followed by yet another par on the 12th. A long putt by Steve on the 13th saved them for yet another half.

But on the 13th a par was good enough to give the Blues another win. (6-2). It was at this point that K revealed that whilst he he could be a bit grumpy, recently he was getting a bit grumpy and angry - though on reflection we decided that the match was making him a bit of a BAG (bitter, angry and grumpy!) But only in a friendly way!!

Anyway back to the match - A par on the 15th was good enough to earn the Blues another half. This time we had even more time to examine Paul Jackson’s ball as it had arrived on our green before we had. We decided it was definitely a ball with a winning streak! (We did consider marking it red all over given its rather dangerous status!).

Onto the 16th. I don’t think at this point K was actually adopting a bunker mentality, but he did enter at least 2 of them on the way up to the green. But yet another par for a Blue team win (7-2), closely followed by another par win on the 17th, brought the match to 8-2 for the Blues.

But on the final hole, as befitting Steve’s role on the day, he brought out his Captains’ Putter and sunk a very long putt to earn the Reds a half with show-hole par.

So in for a drink after a thumping Blue win 8-2 with the teams getting 8 pars on the back nine.  Closely followed by the 2nd match teams to find we were right about the winning ball - another thumping 8-2 result, but this time to the Reds. It was stacked up to be an interesting set of results to come in.

And they are there below.  A couple of draws, a couple of close scores, and one very unusual match in which 17 holes were won by one side or the other.

The Captain had previously won the Captains Putter when he was the Blue Vice Captain so the result was in keeping with recent practice.

Our thanks to Steve for the welcome drink at the end and for the sleeves of balls provided to the winners.
​ 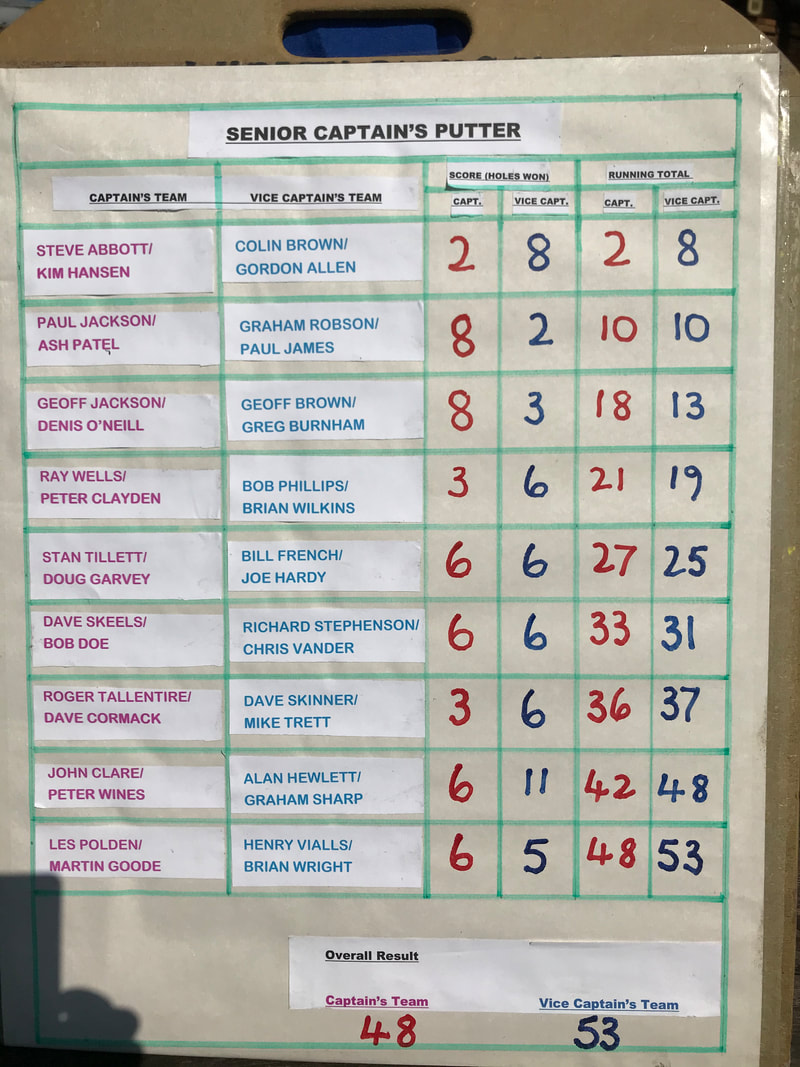