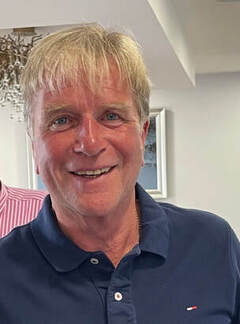 Senior Captain's Day Competition
Dave's special day started well as everyone expected that morning turned up.
Fuelled by the Captain's coffee 37 Seniors (5 senior, seniors, playing the separate 9 hole comp) set off to play on a very warm, but pleasant day. With the former 7th green re-opened and the normal tee position in place on the 9th, extra challenges were offered.

​Unusually for the Seniors no major mishaps were reported and rounds proceeded smoothly and in good time. In Dave's four ball were Roger T (Aka. Colombo/Sarge/Fu....g Hell),
Kim H (or Kim Han Sen as his apparent friends call him) and Gordon A ( Flash). And a very enjoyable 4 ball it was. Some good golf (and a bit of not so good golf of course), some good banter, and the opportunity to hold up Dennis a little in the group behind! There was one memorable line from Roger during the round (not an expletive) when, disappearing into the bushes, he shouted out, 'don't worry I've got a hooker!' We think it was something to do with a lost ball, but we didn't check, he wasn't very long and he didn't appear to be red in the face when he emerged!

A drink on Captain Dave out on the upstairs terrace was very welcome and set us up very nicely for the two course meal that was to follow.

Good pre planning appeared to result in everyone getting the right meals, which is rare, although a quick training programme had to be delivered before the meal to Sarah, by the Captain, because although she appeared to be very familiar with seniors nicknames, their real identities had never been revealed!

I tried to work out if it was the age factor that determined the choice of Bangers and Mash or the Peri Peri Chicken, but came to the conclusion it was more to do with waistlines!
Anyway those choices and the lemon dessert went down reasonably well.

Senior Captain Dave addressed us at the end of the meal with a very challenging speech. Having got his vernacular language programme started with Sarah he regaled us with a list of 'nicknames' for some of the seniors.  He failed to name his own, but Dennis informs me he is 'normal' and thus not eligible ! Although I have heard refs to 'Skins' - I've never asked! Mention was made of successes in competitions and matches, although not his own of course as Spiggy has been quick to share with us all. He updated us on 'coarse' matters and the Ed meeting (yawn). I think Dave must have been on another training programme recently because at one point he started to talk about engineering, pumps and water treatment, drainage ditches  etc - it all sounded very interesting...... A few special mentions were made (Ash for the excellent and cheap local golf trips) (Chris and Ray for the organisation on the day etc- I think he forgot his Vice Captain, but I don't think it was deliberate), (and of course Sarah and the team for looking after us).  Unfortunately, the tone was lowered at one point when Dennis's eagle was mentioned (yawn) although it was balanced out by his 16 on hole 7! He reminded us of his Guest day on the 22nd August and encouraged seniors to get their names down to play regardless of whether they bring guests or not.
Dave asked whether he should tell us a joke - the new guys must have said yes - they'll learn! Anyway I tried to listen carefully and I think it had something to do with eagles eating swans - I thought it might have something to do with Dennis's eagle, but I wasn't sure as I'm not aware of a 'swan' in golf?

So we went onto the day's results and winners, and the giving out of prizes. These are listed in full below.

A very well done to newish 'Señor' Don Buckingham with a magnificent  score of 47 in the day's Captain's Cup.  And also to Brian Wright on winning the 9 hole comp with a score of 22.

Assisted by Coloumbo (he hasn't managed to hunt down all the missing trophies though? ) the cups and trophies etc for the 20 competitions/knock outs held in the first half of the year were presented.

Photographs are set out below.

In support of the Captains (GGs) Charity a ‘guess the total points scored by all players’ sweepstake was run.  £190 was collected on the basis of half to the charity and half to the winner. Steve Benton's guess of 1197 was the closest to the actual figure of 1199.
​While on Charity donations, It was mentioned that both Don (1st) and Chris V (3rd) had very generously offered back their Prizes for the day, which with another generous donation from Bob Phillips, who couldn't attend, added a further £80. Dave was a happy man.

Captain Dave thanked those who were involved in making the day happen and all those that took part.

And a very successful day it was.

​I'm sure we all thank Dave for his hospitality on the day. 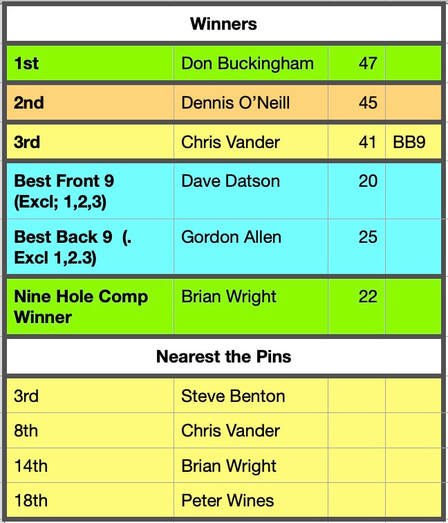 Spot the Winners this year (so far) and those contemplating better games ahead. 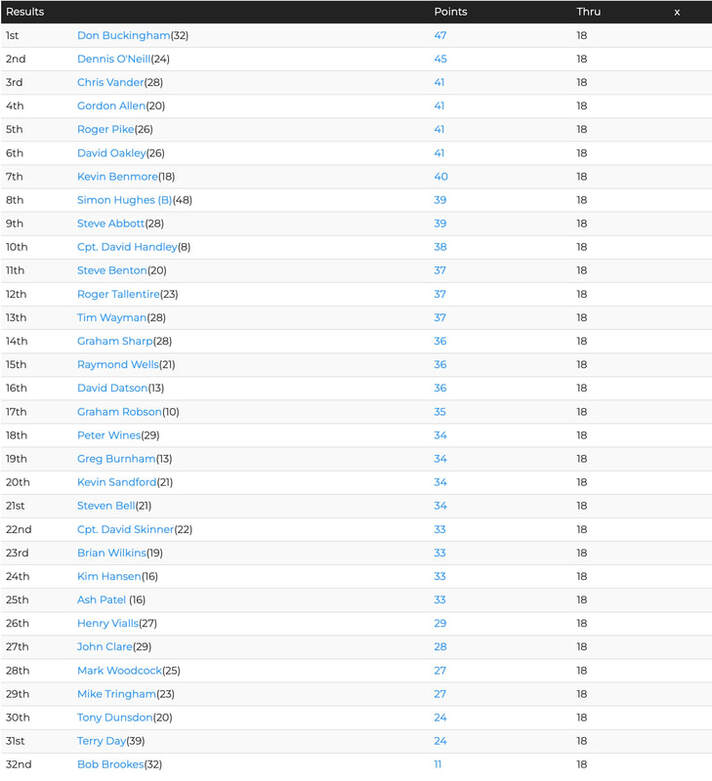 Seniors Prize Giving List for Competitions in first half of 2022

A cupful of winners from the list above were presented with their trophies by Captain Dave. He couldn't present his own (single !) cup so Competition's Secretary Chris Vander did the honours. As you can see last years GOY (Greg) and this year's Bandit (Vice Captain Kev) featured very heavily. A thanks to Roger T for all the work involved in clambering in lofts, polishing cups and transporting them all to the club to be so well received.